Two familiar faces are set to play a key role in the Woodville community, helping families to lay their loved ones to rest and cope with the pain of bereavement. 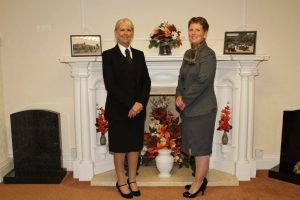 Lorraine Walker (left) and Angela Bowyer who have joined the Woodville Co-op.

Angela is the new bereavement and community co-ordinator, while Lorraine joins the branch as a funeral director.

The appointments follow the retirement of Lin Bradford and Rita Whetton who became well-known figures in the village over many years.

“We’d like to pay special tribute to Lin and Rita for helping so many people in Woodville,” said Glen Speak, Tamworth Co-op’s deputy funeral manager.

“We wish them both a very happy retirement and would like to welcome Angela and Lorraine. We’re very excited to have them on board and they will bring many new ideas to help serve local people.”

The two women are both well known themselves in local funeral and bereavement support circles, having worked together for A E Grice Funeral Service in Ashby. They have also lived locally for many years.

Angela says she will be involved in funeral arrangements, but the focus will be on helping people to come to terms with loss.

“I’m very excited by this role as it will mean going well beyond the normal duties of a funeral director to offer free support and aftercare to the bereaved,” she said.

She knows only too well the devastation that death can cause, having lost a daughter who was just 28 days old. That experience changed her life and was the reason she became involved in funeral and bereavement care. It also led to her setting up SANDS, a Burton support group for people who have suffered stillbirths or lost a young child.

“My aim is to help this area lead the way and become a shining example of how a funeral firm can support people suffering from any type of loss. I’m working on a new community driven initiative which I should be able to announce soon,” she said.

Working for 20 years in the profession, Angela became a funeral director in 1999. She has run five funeral homes, including two in Burton and one in Ashby. She has a Diploma in Funeral Directing and has gained formal qualifications in counselling.

Angela lived in Woodville for 20 years and in Ashby for nine years before moving to Stretton with husband Alan. Her four sons and two granddaughters all live local to Woodville. Her hobbies include ‘touring around the country’ in their motorhome.

Lorraine entered the profession as a funeral administrator in 2002 and has worked in Ashby, Swadlincote, Measham, Derby and Castle Donington.

Her role at Woodville will be mainly on the funeral arranging and directing side, although she will also play a part in bereavement support.

She is married to John, has two sons and is the daughter of Sandra Wyatt, the Conservative councillor for Swadlincote. Lorraine has a Foundation Certificate in Funeral Directing and is a prolific global traveller. Her favourite countries include Hong Kong, Singapore, Vietnam and Thailand.

“I am committed to providing excellent service to local people and am proud to be part of a team working not just for the benefit of families but the community in general,” she said.