Polesworth scouts will be packing a new set of tents when they set off for summer camp, thanks to the generosity of customers at their local convenience store.

Shoppers at Polesworth Co-op donated the dividends earned on their purchases to raise £1,450 for Polesworth Abbey Scout Group.

The money, from the shop’s Community Dividend Fund, will be enough to buy six new tents so that the whole group, including cubs, beavers and scouts, can pitch up at a district camp in their school holiday. 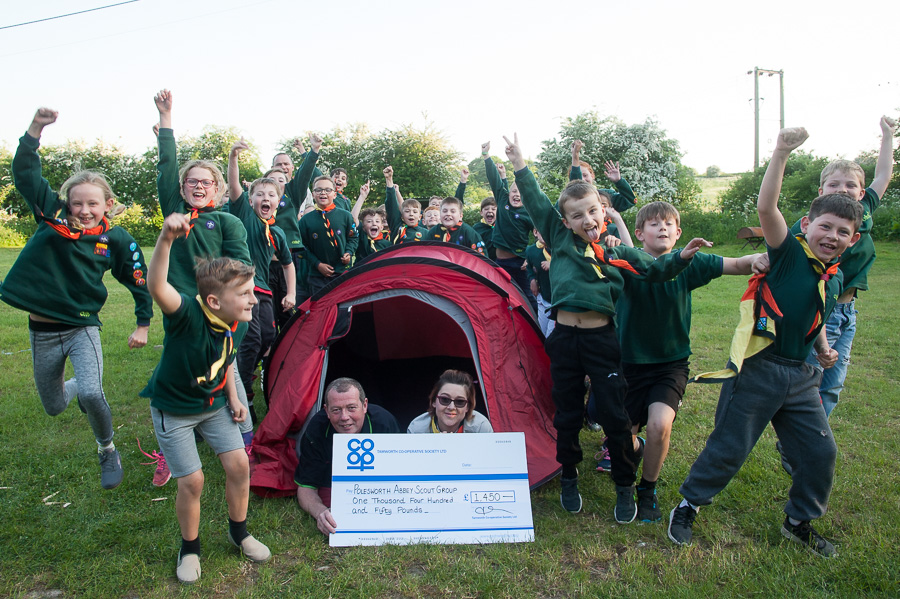 Karl Vyse, manager of the Tamworth Co-op owned store, said he was delighted the shoppers had put in such a good effort to support the scouts.

“The fund distributes thousands of pounds every year to charities and other organisations, like this one, which are at the heart of the community. All the money is raised through customers donating their dividends to a good cause.”

Cub scout leader Richard Harrison said: “It’s very difficult for us to raise this sort of money, so we really are thankful for this gift. It will enable us to buy about six tents. Anything we have left over will be spent on camping equipment which needs to be updated.”

The group was founded in 1971 as Polesworth Scouts. It has more than 100 members, aged six to 18, who meet in purpose-designed headquarters at Pooley Country Park.

The boys and girls enjoy a wide variety of activities. Over the last few weeks they have been doing gardening, pottery and building bug hotels out of sticks for creatures to shelter in hedges. When they go to their camp in Leicestershire they will be learning how to cook on a fire with no utensils and other outdoor skills essential for scouts to acquire.

The Community Dividend Fund has handed out £10,000 in 2018 to 13 schools, scout groups and charities, each adopted by one of Tamworth Co-op’s trading outlets in Staffordshire, Warwickshire and Derbyshire.