A Catholic priest had his prayers answered when he turned to Tamworth Co-operative Society for help in running a winter night shelter for the town’s homeless.

Father Michael White hand-delivered a letter to the chief executive, asking if the Society could provide a venue for the shelter during December, January and February.

No suitable accommodation was available, but by chance board members were meeting the next day and decided on the spot to donate £5,000 to pay for food, toiletries, heating and night cover. 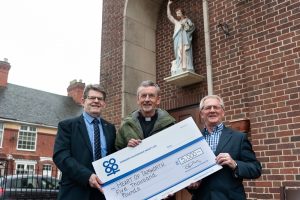 Fr White, parish priest at St John the Baptist Church in St John Street, said: “I think it was meant to be because I delivered the letter just at the right time and my prayers were answered. I’m so thankful for the support.

“I wrote to Tamworth Co-operative Society because it has a great history of helping people who are struggling. I said the world has changed in many ways and maybe the reasons for people being poor have changed too, but the vulnerable still need the help of individuals and businesses who are willing to work together. The Society has a rich history of doing this.”

Bob Read, chair of the board, and deputy chief executive Andy Richardson, presented the cheque to the church which has since found space to provide the refuge.

The money has come from Tamworth Co-op’s Cash in the Bag fund and the 5p charge for plastic shopping bags.

Mr Read said: “The chief executive, Julian Coles, gave board members a copy of the letter and we were all touched by it. It wasn’t on the official papers for the meeting, but the board unanimously decided it was such a worthwhile cause they wanted to make this donation.

“There’s been a lot of publicity about homeless people dying on the streets and I’ve seen them in Tamworth sleeping in the centre of the town. I thought with Christmas coming up we’ve got to do something to help.”

Mr Richardson added: “I’ve come in the morning into work and found a man sleeping in the doorway of the department store. It’s very sad to see in this day and age.”

The church has recently been refurbished and has room for a dining area and separate dormitories for men and women. There is also a shower which can be accessed from outside the building.

Organised by the Heart of Tamworth community project, the initiative is in its fourth year, having already provided a roof over the head for around 120 rough sleepers in Tamworth.

The 2019 shelter will cater for an average of six people each night. They will be given a meal, a bed for the night, plus breakfast and a sandwich the next day. The food will be served up by 160 volunteers, including members of local churches, who will be working in shifts.

The project is also being supported by Tamworth Borough Council, which is funding a co-ordinator, and the Starfish Project which has led the shelter in previous years.

Fr White said between 80 and 90 per cent of those attending in the past three years are now in permanent accommodation after being reconnected with support services. Relationship breakdowns and being in arrears with rent or mortgage payments had forced many of them onto the streets. They included former soldiers with nowhere to go after leaving the army and young men who had split from their families following rows.