Proceeds from one of the biggest events in Tamworth’s festive calendar will boost a trust set up by the family of a young girl who lost a leg through bone cancer.

Amelia Eldred, from Kingsbury, was just eight when she had to have her left leg amputated last year. She underwent a rare procedure to reattach the lower part of her leg backwards so that she could have an artificial limb fitted.

Parishioners at Kingsbury Methodist Church spearheaded a fundraising drive for Amelia which raised £30,000 to provide her with specially-made ‘blades.’ 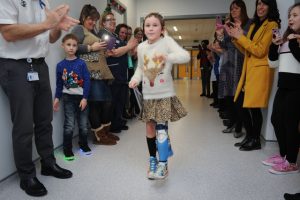 The initial target was soon exceeded and the Eldred family has now set up a charitable fund to help other children in similar circumstances.

Tamworth Co-operative Society is to split the money raised during a collection at its hugely popular Christmas memorial and carol service between the Amelia Eldred Trust and St Editha’s Church, which will host the event on December 6.

Hundreds of people are again expected to pack out the church, to celebrate Christmas and remember lost loved ones with a moving candlelit tribute

It forms the centrepiece of the service, providing a poignant moment of reflection and comfort for the bereaved in the magnificent setting of the medieval building.

In time-honoured tradition, a Scottish piper will play for guests arriving for the service which will be conducted by Reverend Alan Gordon, the vicar of Tamworth.

The proceedings will get under way at 7pm with words of welcome from Amanda Woodward, general manager of Tamworth Co-op’s funeral division.

Soloist Tom Clamp will once more perform festive songs, joined by Sing4Pleasure, a mixed group of people, of all ages, who regularly sing at nursing homes and other venues. 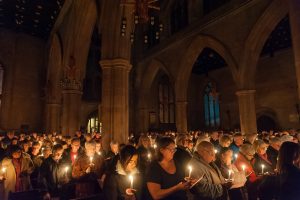 Hundreds of people light candles in memory of relatives and friends at the 2018 Tamworth Co-op Christmas memorial service which attracted a record attendance. (Picture by Enigma Communications).

Staff from the funeral service will also give readings based on the theme of Yuletide. St Editha’s church choir will lead the carol singing, including a rendition of Silent Night.

Each member of the congregation will be handed a goodie bag containing a candle, sweets, and other items.

Tamworth Co-op chief executive Julian Coles will give the final closing address, after which complimentary mulled wine, orange juice, mince pies and Christmas cake will be served in St George’s Chapel. A free prize raffle to win a Christmas hamper will also be drawn.

Amanda Woodward said: “We are delighted to support Amelia Eldred’s trust as it is a such fantastic cause and she is a truly inspiring little girl.

“Over the past few years the carol concert has just grown and grown in terms of the numbers attending. Christmas can obviously be a difficult time if you’ve just lost someone close, but even if the bereavement was some time ago it can still stir up painful feelings.

“I think people appreciate being able to come along to a festive occasion that lifts their spirits and also helps to lessen their grief.”