A Tamworth group which helps people with special needs will be holding a summer prom funded by cash from the Tamworth Co-operative Society. 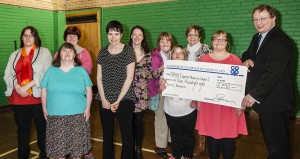 SPIN (Special People In Need) was formed by a group of parents and carers in 1988. It is now a youth club with around 150 members who meet up every Wednesday evening in Spinning School Lane.

The group caters for people aged over 13 and several members are now in their 40s.

“For some it is their only social activity away from their parents,” said SPIN leader Sylvia Geldard who has played a key role since 1989.

“We cater for around 60 members and have 12 staff, including qualified supervisors and several volunteers.

“The annual prom is one of the most popular events of the year and everybody is looking forward to it. We have received money from the Tamworth Co-op before and are extremely grateful for that support. It’s been fantastic.”

The money has come from the Tamworth Co-op’s Community Dividend Fund which generates more than £10,000 for scores of worthy organisations every year. The cash for SPIN was raised by shoppers at the Tamworth Co-op department store donating dividends they have earned on their purchases to the charity.

The cheque for £250 was handed over by department store co-ordinator Steve Hawkins.

“SPIN has been carrying out fantastic work for nearly three decades and the Tamworth Co-op is delighted to be able to support their efforts again via our Community Dividend Fund,” said Mr Hawkins.