Staff at a Lichfield school have been clinking their coffee cups to a local business which helped them put the final touches to their new impressive community café.

Saxon Hill School recently completed a £250,000 improvement programme in its dining room which includes a newly opened café area. And money from the Tamworth Co-op’s Community Dividend Fund was used to equip the kitchen, including a set of new crockery. 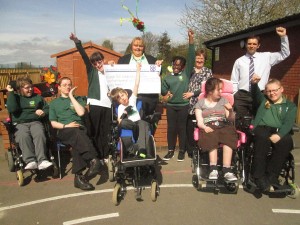 Head teacher Jon Thickett said the school was delighted to have received £570 from the dividend fund which helps many good causes locally each year.

Mr Thickett said: “This has helped towards the cost of equipment in the kitchen and also furniture in the café.

“The Tamworth Co-op’s scheme is very worthwhile and is much appreciated by pupils, staff and parents.”

The cash was raised by shoppers at its Lichfield convenience store in Marks Way donating the money they had earned to the school.

Every year numerous community groups receive cash from the dividend scheme, with more than £30,000 being handed out during the last three years. Each of the Tamworth Co-op’s branches across Staffordshire and South Derbyshire supports a separate organisation on its doorstep.