The bells will be ringing out from St Editha’s Church on December 2nd for one of the biggest events in Tamworth’s festive calendar. 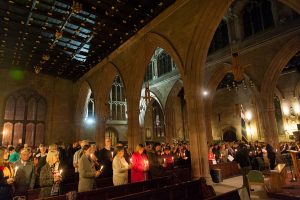 The Tamworth Co-op Christmas Carol and Memorial Service is attended by hundreds of people each year.

Tamworth Co-operative Funeral Service’s Memorial Carol Service has become a focal point for families wishing to remember their loved ones at Christmas.

Hundreds of people are expected to turn out for the moving service which starts at 7pm.

The most poignant part of the proceedings comes during a rendition of Silent Night when a sea of candles is held aloft in silent reflection of lost friends and relatives.

World War One veteran Frederick Stokes will be among those remembered during the evening with two of his relatives attending.

For nearly a century the Tamworth soldier lay in an unmarked grave until this November when the Tamworth Co-op provided a headstone bearing his name and regiment.

The grave in Amington Cemetery is now a fitting resting place for the private who survived multiple gas attacks only to die shortly after the war from meningitis.

The service will be conducted by the vicar of St Editha’s, Reverend Alan Gordon, with readings of poems by funeral staff.

Tame Valley Co-operative Learning Trust Choir will also be performing at the event, along with St Editha’s Church Choir and piper Paddy McGowan.

General manager of Tamworth Co-op funeral division Amanda Woodward, who will deliver the welcome address, said: “The service was originally intended to bring comfort to the recently bereaved, but over the years it has been opened up to include anyone who wants to join in.

“It’s an opportunity for people to reflect on the lives of their relatives and friends, whilst also celebrating Christmas. We have sent out invitations, but if anyone wants to come along on the night they are most welcome.”

She added: “We have been amazed by the number of people who have attended the service in recent years. So many have commented on the uplifting atmosphere it generates.”

Goodie bags containing free gifts, such as candle holders, sweets and pens, will be handed out to the congregation.

A collection will be held to raise money for St Editha’s Church and Tamworth Samaritans. The service will be brought to a close by Tamworth Co-op chief executive Julian Coles. Complimentary mince pies and drinks will then be served in St George’s Chapel.

Members of the public are also invited to place a memorial tag on one of the Tamworth Co-op Remembrance Christmas trees at its funeral homes. Just visit the Bereavement Advice Centre, next to the Co-op department store, or call in at the main funeral home at The Mews, Upper Gungate. Alternatively, ring (01827) 65333 or (01827) 62094 for a member of staff to place a tag for you.