Members of North Warwickshire Retired Miners Club will have two coach outings and a Christmas party to thank the Tamworth Co-op for once 2013 is out.

Secretary Andrew Brown says the cheque he received for £579 from the Tamworth Co-op’s Community Dividend Fund ‘astonished’ all the members. 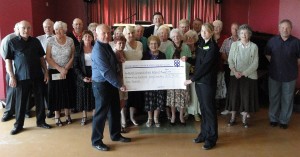 “To be honest they were over the moon, and I just don’t know how the Tamworth Co-op can do this,” he said.
“It’s a great scheme and the money will really help a lot of pensioners who attend the club. It’s the second time the Tamworth Co-op has helped us.”

The club has already organised a trip to RAF Cosford and members are now planning an outing to the seaside. They will also have money left over to put towards a Christmas party with all the trimmings in December.

Helaina Liddiard, senior supervisor at The Dordon convenience store handed over the money at a recent meeting of the club.