A South Derbyshire pre-school unable to raise funds during the coronavirus pandemic has received a timely cash injection from a longstanding scheme supporting local good causes.

Coton in the Elms Pre-school has been awarded £500 from the Tamworth Co-op Community Dividend Fund which will enable it to comply with social distancing rules when it reopens in September 2020.

The money was raised by villagers at the Co-operative convenience store in Rosliston donating the value of their dividends to help the organisation. 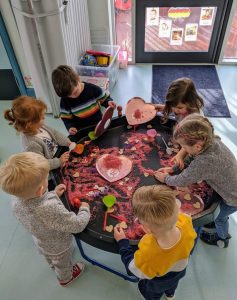 Children from Coton in the Elms Pre-school pictured using a large tray for ‘messy play’ before the pandemic . Thanks to shoppers at the Rosliston Co-op convenience store, they will now have individual trays when they return in September to enable them to keep a safe distance from each other.

Coton in the Elms Pre-school chair of committee Rachelle Evans thanked the Co-op and its shoppers for their generosity.

She said: “As a charity-run pre-school we rely heavily on kind donations such as this, but it’s been particularly hard in the last few months. The impact of corona has been difficult to bear for a lot of our sector. Not only have we missed out on fees but also the opportunity to fundraise, so this is a huge boost to us. Without it we wouldn’t be able to get new resources this year.

“We moved to our new home at the village primary school in November and have been looking to improve our outside space for a while. We will be purchasing separate trays for each child to use for messy craft play, rather than the large messy play trays that they used to share, to help with social distancing. The money will also allow us to buy crayons, pens and other general craft resources to be put in individual packs for each child.”

She added: “The Co-op scheme to help local organisations is brilliant and to have been chosen by the Rosliston branch really has made our year. I’m a Co-op customer myself and to know that a little of what I spend goes back into the community really keeps me coming back to the store!”

Coton in the Elms Pre-school has been at the heart of the village for 40 years and was previously based at the community centre. It caters for children aged two to four who follow the early years foundation stage curriculum to prepare them for the wider world of school.

Currently there are 15 youngsters on the roll who are encouraged to take part in a free flow style of play. They move around doing different fun activities, such as searching for bugs with magnifying glasses, painting, climbing on outdoor equipment, counting and listening to stories. Two staff supervise the children.

Neil Wakelin, manager of the Tamworth Co-op run store in Main Street, said it was excellent to hear the money raised by customers would be making such a difference.

“We’ve been supporting groups on our doorstep for the past decade as part of the Community Dividend Fund. The fund has handed out more than £100,000 over the years to a variety of good causes, including clubs, charities, churches and schools, which bring real benefits to local residents, whether that’s through education or recreation. Each branch of the Tamworth Co-op adopts a different cause every year.”