Customers at a convenience store have cashed in their loyalty rewards to raise £500 for a popular South Derbyshire playschool which has been running for more than 40 years.

The money, collected by Rosliston Co-op shoppers donating the dividends earned on their purchases, will fund educational toys for the village under-fives pre-school. 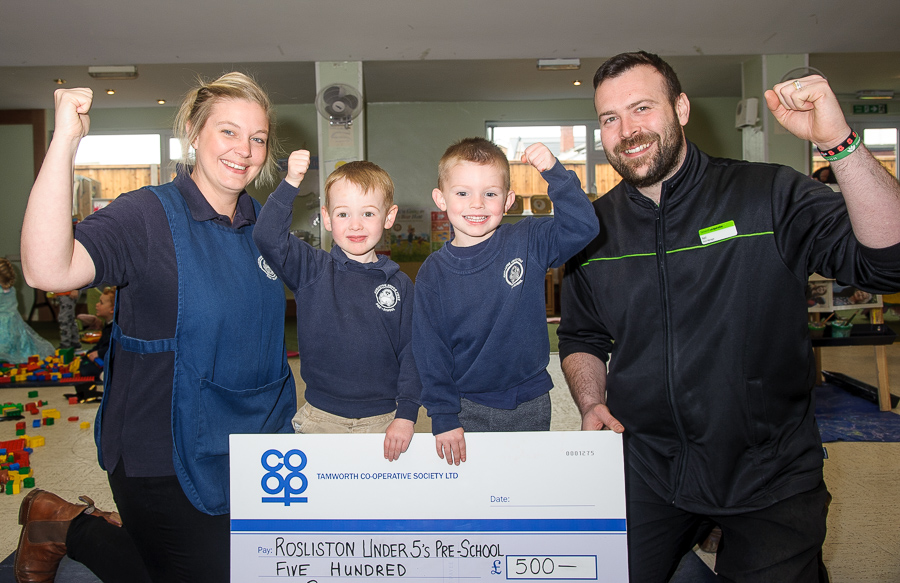 Kirsty Brown, manager of Rosliston Under Fives Pre-School, thanked both the Co-op and the shoppers for their generosity.

She said: “A donation like this means such a lot to us because we are a charity, so we really do owe them a big thank you. We will spend some of the money on sensory boxes, which light up in different colours and shapes. The children can draw on them, which stimulates their senses, and we’ll also be able to afford some new technology toys with buttons on that develop their motor skills.”

Neil Wakelin, manager of the Tamworth Co-op operated store in Main Street, said he was delighted to be able to present a cheque for the money.

The pre-school has 42 children, aged two to four, on its roll, and holds sessions every weekday morning during term-time, with a manager and five staff running arts and crafts activities in the village hall.

The youngsters also take part in shows during the year, and go on trips. Every Wednesday they meet up in the hall with older residents for shared recreation. While the tots play with their toys, the adults chat and enjoy games such as word searches. Members of the Wednesday Club range in age from two years and three months to 90.