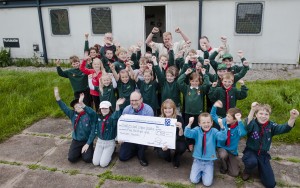 Raising the roof – cheers ring out as Vicky Freeman, manager of the Tamworth Co-op food store in Rosliston, presents the Seal and Linton Scout Group with a cheque for £513.

A scout group in Rosliston is about to ‘raise the roof’ – with help from the Tamworth Co-operative Society. The Seal and Linton Scout Group, which caters for 30 Beavers, Cubs and Scouts aged between 6 and 14, was formed in 2009.

A second-hand portakabin was purchased in 2011 and has become the group’s home in Strawberry Lane.Unfortunately the building has started to show its age and numerous repairs have failed to stop a serious leak from developing.

But a cheque for £513 from the Tamworth Co-op’s Community Dividend Fund means that a brand new roof will soon be in place.

“It’s great to have support like this and the money will really help us,” he said.

“Scouting is a great way to get young people into the outdoors, doing adventurous activities in a controlled and safe environment.  We’d love to hear from anyone who would like to join us.”

“It was great to present the group with the cheque and also get an insight into some of type of activities they are involved in,” she said.

“I’m glad we will be helping them all to keep dry whenever the rain forces them indoors.”

The Tamworth Co-op’s Community Dividend Fund raises a five- figure sum for many local organisations every year. Each Co-op branch supports a separate cause.

Shoppers at the Rosliston convenience store donated the dividends they earned on their purchases to the scouts.

For more information on the Seals and Linton Scout Group email andywinebloom@aol.com or call 07845 959697.