The director of Tamworth Samaritans says she is overwhelmed by the size of a cash donation to her branch which is still reeling from the financial aftershock of the pandemic.

The £5,000 grant from Tamworth Co-op’s Community Dividend Fund is the largest ever handed out from the scheme which distributes a five-figure sum to local causes each year. The money is raised through generous shoppers donating the ‘divis’ they have earned on their purchases.

Judith Hepburn, director of Tamworth Samaritans, said she was staggered to discover how much the branch had been awarded.

“To be honest I nearly fainted when I opened the cheque!” 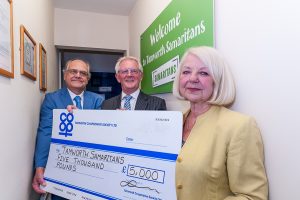 Julian Coles, chief executive of Tamworth Co-operative Society, and his former deputy Bob Read hand over the cheque for £5,000 to Judith Hepburn, director of Tamworth Samaritans.

“I received a telephone call from the Society’s chief executive saying the money was on its way. In my mind I thought it would be a similar amount to the average donation we receive which is around £100-£200. To receive £5,000 is just extraordinary.

“We are so deeply grateful for this money as we are an independent branch and pay all our overheads ourselves. During the pandemic we obviously couldn’t get to events and hold our collection buckets out in public, and that has really stretched our resources.

“What is so lovely about this donation is that, unlike some grants, it comes with no restrictions attached. That gives us a free hand to choose how we spend it.”

Judith says £3,000 of the money will be spent on refurbishing the kitchen used by volunteers in between handling crisis calls at its base at Manor House in Lichfield Street.

“Our building in Tamworth is old, and although it does not suffer from issues such as damp, certain parts of it are in desperate need of updating.

“We have made various improvements such as bringing in new carpets, but the kitchen is in a very poor and unhygienic state.

“Many of our volunteers come into the building after their own work shifts. When you’ve had a very distressing call to deal with – and we get a lot of those – it is essential for them to be able to make a cup of tea in a clean and nice place. They often need to take a break and come to terms with what they have been dealing with.

“It is vital to provide a clean, professional environment for them. We need to do everything we possibly can to retain people like them, and to attract more people in future.”

The remaining £2,000 will be spent on buying new furniture including tables and chairs and adding other homely touches. 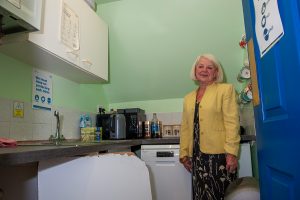 Judith Hepburn pictured in the Samaritans kitchen which will soon receive a full make-over thanks to Tamworth Co-operative Society and its food shoppers.

Tamworth Co-op chief executive Julian Coles said the Society is delighted to be able to help such an ‘outstanding charity.’

“I think the importance of the work the Samaritans carry out in their free time is widely known. However, many people might not realise just how hard they have to fight for every penny to be able to continue their life-saving service. It’s heartening for us to be able to hand them such a substantial donation.

“The Tamworth branch has previously won the Queen’s Award for Voluntary Service, the highest award that can be given to a local volunteer group. That says a lot about the calibre of people we are supporting. I’d like to thank all our food shoppers who helped to raise this money by generously donating their dividends.”

Mr Coles visited the branch to hand over the cheque with his former deputy Bob Read who was chairman of the Society’s board when the grant was approved. Mr Read previously enjoyed a career spanning 50 years and was second in command of the Tamworth Co-op when he retired in 2015.

Tamworth Samaritans has 85 volunteers answering up to 800 calls a month in addition to replying to around 80 emails. Around 150 more people are on the waiting list to start the in-depth training programme which can take up to a year to complete.

Not all those who get in touch with the local branch are suicidal. Increasingly loneliness is prompting people to turn to the service, while others have a mental or physical illness, or family problems they want to talk about.

Tamworth Samaritans are active in other areas too, including making regular visits to Swinfen Hall Prison and Young Offender Institution. Prisoners are trained to become listeners so they can provide support to young offenders who are finding life a struggle.

Local volunteers also visit schools in Tamworth and Lichfield to talk about how young people can support their fellow students should they experience difficult times.

From time to time, members of the team are called to Tamworth and other local railway stations to comfort those who have witnessed traumatic events. Judith says there have been two rail deaths in the last couple of months alone.

“We exist to prevent tragedies like that from happening, and we know that on occasions we are successful in doing so. We implore people who urgently need to talk to somebody to get in touch immediately as having that support can be crucial.

“Times were hard for people during the pandemic and rising inflation and energy bills are causing a lot of hardship and suffering right now. We provide a 24-hour helpline for people who are upset, troubled or feeling suicidal and the number of calls we receive are bound to increase as a direct result of inflation.

*Anyone in distress or feeling alone can call Tamworth Samaritans for free on any phone on  116 123. For more information about the Tamworth branch, including how to volunteer or help with fundraising, visithttps://www.samaritans.org/branches/tamworth/