A school praised by Ofsted for the way it embraces the ‘creative curriculum’ is to re-stock its library, thanks to funding from the Tamworth Co-operative Society. 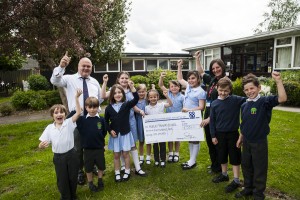 Glynn Morgans, head teacher of Hurley Primary School, and Emma Horsham, manager of the Tamworth Co-op store in Wood End, pictured with members of the school council at the handover of the £661 cheque.

Glynn Morgans, head teacher of Hurley Primary School, says the cheque for £661 will be used to buy more topic books aiming at firing the imagination of pupils.

The money has come from the Community Dividend Fund which raises a five-figure sum each year to benefit many worthwhile organisations.

Parents and children helped to raise cash for the school by donating the dividends they earned on purchases at the nearby Wood End convenience store.

Ofsted inspectors also singled out Hurley Primary School the way it engages with the local community.

Mr Morgans says the link-up with the Tamworth Co-op is an example of this and is a very positive relationship for the school to have.

“It is an excellent scheme which fosters links with the school and the wider community,” he said.

“We’re delighted and very grateful to receive this cheque.

“I’d like to thank the Tamworth Co-op for this significant amount of money and all their customers who helped to raise the money for us.”

Emma Horsham, manager of the Tamworth Co-op convenience store in Wood End, who handed over the money, said:

“The school’s reputation is spreading far and wide and we hope the pupils will be inspired by their new books.

“It’s very clear that they are encouraged to be creative at the school and it’s great to know that the Tamworth Co-op is playing a part in that.”