A North Warwickshire school is set to get top marks – on its play area.

The colourful, long-lasting markings will enable pupils at Kingsbury Primary School to enjoy a series of fun games and activities from basketball to hopscotch for years to come.

Headteacher Karen Hanson says the new-look playground will give the school’s 266 children, aged four to 11, plenty to do during lunch breaks. 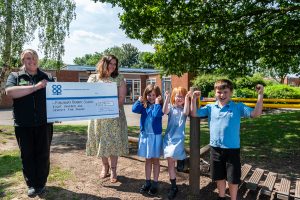 Funding for the scheme has come from Tamworth Co-op’s Community Dividend Fund, which is distributing more than £10,000 this year to local schools. Kingsbury Primary School received £875 as a result of shoppers at the village Co-op convenience store donating their dividends on purchases.

“It has been a challenging 16 months or so for everyone, our school community included, and this money from the Tamworth Co-op has been like a ray of sunshine or the pot of gold at the end of the rainbow,” said Mrs Hanson.

“Parents of pupils at our school have also helped to raise money.

“We’d like to say a huge thankyou to everyone involved. It’s a lovely thing to feel people in the community are supporting us and it enables us to buy those extras that would otherwise take a lot longer to get or would not happen at all.”

The cheque was presented to the school by Sara Perkins, a sales assistant at the Kingsbury Co-op

She said: “We’ve had great support in the village for the school and we’d like to thank all our customers for their generosity in donating their dividends to the school. The money will give the pupils a lot of fun, and that’s fantastic after all they’ve been through with the pandemic.”

For the first time since the fund was launched more than a decade ago, a decision was taken to donate the entire year’s kitty to schools in Tamworth Co-op’s trading areas. Twelve food stores were each linked with a separate school to support.

Payments from Tamworth Co-op’s Community Dividend Fund were also released early this year as the board of directors was concerned about the impact of the national lockdowns on education budgets.