The final organisation to benefit from Tamworth Co-operative Society’s recently launched Cash in the Bag scheme has been announced. 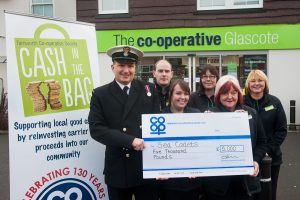 Tamworth’s sea cadets have received £5,000 to buy new equipment which will help them improve their boating skills.

In the past few weeks, Tamworth Co-op has handed out £20,000 to good causes locally, including the Starfish Project, Heart of Tamworth, Community Together – and now the sea cadets.

The money has come from sales of plastic shopping bags in Tamworth Co-op stores since October 2015 when the Government imposed a 5p charge for their use.

Tamworth Sea Cadets petty officer and senior instructor Gary Harborow said: “To have such a phenomenal amount of money given to us is absolutely wonderful. We are so grateful to the Co-op for this generous donation.

“It is a dream come true for the cadets. It will have a huge impact on our ability to deliver more of the cadet experience, helping them to further push their boundaries.”

The money, he added, would be spent on purchasing a stacking trailer and kayaks to take the sea cadets to more challenging stretches of water.

The unit, based in West Street, Kettlebrook, has around 60 members aged 10 to 18 who are given training based on naval customs. As well as being taught sailing and canoeing, they also have the opportunity to gain qualifications in marine engineering, catering and first aid.

Although they could not be further from the sea than in Tamworth, they are fortunate to have Borrow Pit Lake nearby for their work afloat. However, the injection of funding from Tamworth Co-op will enable them to travel further afield to places such as Carsington Water in the Peak District and the Lake District.

The group is part of the UK’s oldest nautical youth charity and is run entirely by volunteers, depending on donations and its own fundraising to support activities. The cadets themselves do a lot of fundraising, giving up their weekends to pack bags in supermarkets and stand outside with collecting tins.

Annette Brindley, manager of the Glascote Co-op where the presentation was held, said: “We’re so pleased to be able to give this large sum, raised by our customers, to such a wonderful youth organisation and to see it going back into the community.”

Petty Officer Harborow, who is a police sergeant in Tamworth, said youngsters who join the sea cadets become more outgoing and confident, often going on to teach others the skills they have acquired.

“For us adults, seeing that cadet journey is quite magical,” he said.

Tamworth Sea Cadets’ parade nights are held on Tuesdays and Thursdays from 7pm to 9.30pm. Anyone interested in joining can find more information on the group’s website at sea-cadets.org/tamworth or call 01827 67778.