Villagers who run a community hall opened for the millennium have received a windfall to fund urgent repairs, thanks to shoppers generously donating the dividends they earn on their purchases. 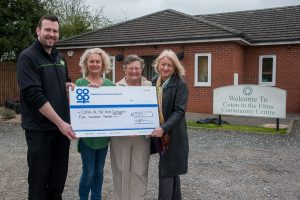 The cash will help pay for the renovation of Coton in the Elms Community Centre, as well as security lighting in the car park and the creation of a herb garden in the grounds.

The money has been raised by customers at Rosliston Co-op as part of its Community Dividend Fund scheme which hands out thousands of pounds annually to local good causes.

Sam Towers, chairperson of the community centre, said the £500 grant would benefit hundreds of people of all ages, from Coton in the Elms, Rosliston and other areas, who use it every week.

“It’s an enormous step for us to get this money because it means we can get the repairs and improvements done far quicker,” she said. “We really are very grateful to the shoppers and the Co-op.

“The building is nearly 20 years old now, so the guttering needs to be repaired, for example, and we also need to resurface the driveway because it’s full of potholes. This money will go a long way.”

The community centre in Elms Road was a Millennium Commission project funded by the National Lottery to celebrate the turn of the century. It hosts the village pre-school, an art group and a bowls club. Weekly bingo sessions are also held there.

Neil Wakelin, manager of the Tamworth Co-op run convenience store in Rosliston, said: “It’s fantastic that we can again help out a local charity. It’s good to see the community pulling together to benefit themselves.”

The herb garden is being created by teenager Jack Evitts for his Duke of Edinburgh Gold Award. His grandmother, Helen Grist, is a sales assistant at the shop. Once completed, it will be used as a sensory garden for the pre-school children and to provide herbs for the villagers who come to the bingo nights.