Shoppers at a Tamworth Co-op food store have provided Polesworth Abbey with a much needed cash injection.

Father Philip Wells, vicar of Polesworth, says receiving a cheque for £853 from the Tamworth Co-operative Society’s Community Dividend Fund was a ‘blessing’ as the abbey’s finances have been hit by the coronavirus pandemic.

A steep fall in visitors during the last financial year has impacted heavily on donations. The abbey’s coffers have also been affected by a significant reduction in its normally popular plant sales.

Customers at Tamworth Co-op’s Polesworth convenience store generously donated the dividends earned on their purchases to raise the cash. 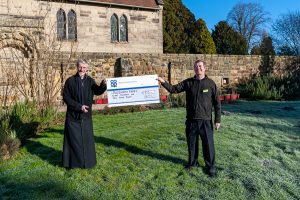 Fr Philip revealed the money is being spent on producing YouTube videos of its twice-weekly services, along with a series of short films charting the abbey’s history. It has a rich heritage having been founded in the 9thcentury by St Modwena and King Egbert.

“We have been able to post videos of Sunday and Wednesday services on YouTube. We also realised that there are quite a few people who are unable to access them online. Thanks to this donation we are also able to put them on DVDs and deliver them into the community.

“I would like to thank Tamworth Co-operative Society and its customers for making this donation possible. The money was very warmly received and has also helped us to produce videos on the Abbey’s history which are available on our website too.”

Store manager Karl Vyse said it proved to be a very popular choice.

“Every year a dozen or so Tamworth Co-op branches are allied to separate community groups. Everyone in this village values Polesworth Abbey – it’s what the village is famous for. As well as being an inspirational place of worship, it hosts various groups including an art class. It’s been an excellent cause for our branch to support, especially as the abbey’s finances have been hit by the Covid situation. We’re delighted to have been able to donate this money.”

During the current lockdown, churchgoers are permitted to attend socially distanced services at the abbey with around 30-40 people regularly turning up.

Fr Philip said people have been drawn to the abbey even when services are not taking place and when the refectory and gardens have remained closed.

“Some have even taken comfort from just physically touching the outside of the building which is very moving,” he said.