Members of a retired miners club are looking forward to an outing and a knees-up after shoppers dug into their ‘divi’ money to give them a treat.

Customers at Tamworth Co-op’s Dordon store raised £500 for North Warwickshire Retired Miners Leisure Club by donating the dividends earned on their purchases as part of its Community Dividend Fund scheme. 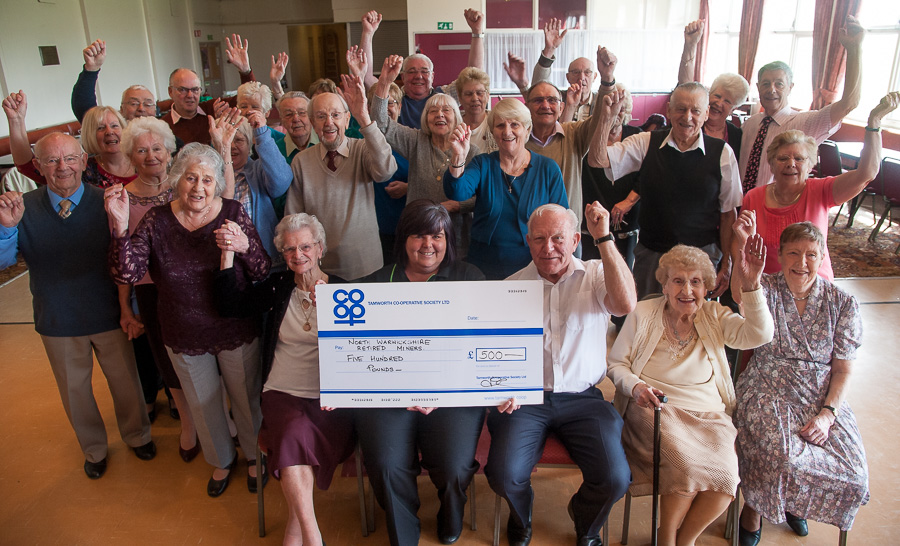 “Our funds have been falling for a while now because we don’t have as many members as we used to have,” he said. “So a cheque like this will really help us. We like to take everybody out for a Christmas party and a meal out every year, as well as a daytrip out somewhere.

“We’ve been to the Cotswolds and this year we’ll probably go to the Black Country Museum. We’re so grateful to the shoppers and the Tamworth Co-op.”

The club, which has been going for 35 years, meets every other Wednesday at Birch Coppice Social Club in Dordon. At one time the organisation had a membership of around 100, but with the passing of many retired miners that figure now stands at 32, reducing the money it receives from subscriptions.

Despite this, the club still holds regular dances, raffles and bingo sessions for retired miners, wives and others living in the Tamworth area. The pitmen used to work at Birch Coppice, Kingsbury, Dexter and Daw Mill collieries until they were closed down. The oldest member is 92 and the rest are over 60.

Dordon Co-op convenience store manager Julie-Ann Kester said: “This scheme has been running since 2010 and hands out thousands of pounds annually to support local good causes like this one.