Pupils at a village school have had a lot of thinking to do – they’ve been tasked with the job of deciding how to spend a £254 windfall.
The money was presented to Stanton Primary School by Tamworth Co-operative Society and came from its Community Dividend Fund which helps numerous good causes across Staffordshire and South Derbyshire each year. 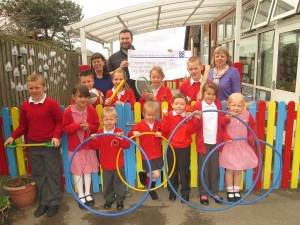 Neil Wakelin, manager of the Stanton Co-op convenience store, hands the cheque for £254 to head teacher Christine Nettleton. Also pictured are teaching assistant Helen Alton and several pupils who will benefit from the cash.

Head teacher Christine Nettleton said she has given the school council the task of choosing how best to spend the money.

“It consists of representatives from each year group and they completed a survey of all the children in school to ask what games or activities they would like to spend the money on,” she said.

“They spent a considerable time looking through catalogues in order to get the best value for money and so to make the money go as far as they can. They all commented on how expensive things are and how you have to make sure you were getting the best deal. The final order was for some playground games and activities.

“We’d like to thank the Tamworth Co-operative Society for the money, and also all the shoppers at the village’s Co-op convenience store for helping to raise the cash by donating the dividends on their purchases to the school.”