Glen Speak, deputy manager of the Society’s funeral division, has revealed how he intends to bid farewell to the world when the time comes.

Mr Speak, pictured, plans to have a double-lidded coffin, with the first one opening to reveal rows of whisky shots. Mourners at his funeral will then be invited to have the last drink ‘on him.’

He disclosed his unusual wish in the run-up to Dying Matters Awareness Week, which is encouraging people to take part in the ‘Big Conversation.’ 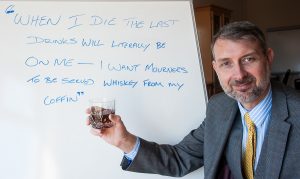 To give people the chance to discuss all issues surrounding death, the Tamworth Co-op is hosting a French-style street café outside the bereavement centre in Colehill on May 10, 10am-3.30pm. Free tea and coffee will be served, and funeral staff will be on hand to offer advice.

Organisers stress the event is not a hard sell of funeral services, but an opportunity to talk informally with experts about any aspect of what is a taboo subject.

Laurna Porter, probate manager at Glaisyers Solictors, will also be at the event to answer legal queries on topics such as probate, power of attorney and wills.

One lucky visitor will win a hamper in a competition asking people what they want to do before they die.

Mr Speak said a key part of the big conversation is planning your own arrangements.

“Having spent more than 20 years in this profession, I know that most people don’t like to think about organising their own funeral. However, if they don’t it means everything has to be planned from scratch, adding to the burden of grieving relatives.

“It’s also their final party and they really ought to have the biggest input into it. That way it’s more of a personal goodbye. It doesn’t have to be a traditional funeral. Just about anything is possible these days – even having a fire engine or a camper van as a hearse.”

Visitors to the café will also be able to get information on how to meet rising funeral costs.

The Tamworth event is one of around 500 being organised across the UK as part of Dying Matters Awareness Week (May 9-15).