Disabled visitors to one of the country’s best preserved 19th century industrial monuments will be able to appreciate its full splendour, thanks to a grant of more than £500 from Tamworth Co-operative Society.

The money is being used to buy a high quality remote camera which will give visitors to the Claymills Victorian Pumping Station on the outskirts of Burton a virtual tour of an engine house. 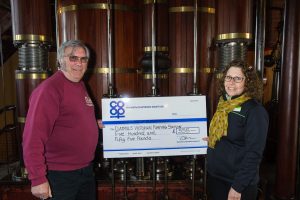 Derek Goodman, a director and volunteer co-ordinator of the Claymills Pumping Engines Trust, pictured receiving the cheque for £555 from Marina Hutton, manager of the Tamworth Co-op’s Stretton store, in one of the engine rooms at the station.

Without the camera people with mobility problems are unable to view the upper floors of the building because of the steep access via a spiral staircase.

The cash was raised by shoppers at the nearby Tamworth Co-op Stretton convenience store donating their dividends as part of a scheme which enables them to support good causes on their doorstep.

Thousands of pounds are handed out each year as part of the Society’s Community Dividend Fund to organisations and charities in its trading area.

Derek Goodman, one of the directors of the Claymills Pumping Engines Trust which has restored the site, said: “We already have a camera in the engine house, but we want to buy a hi-definition camera so that people can see the engines working on a better quality camera. They will be able to move the camera around to see everything on driving and packing floors. We are very grateful for this donation because it will allow us to improve our facilities for the disabled.”

The equipment will be used to beam live pictures of the engines in operation to a computer screen in the visitor centre.

Marina Hutton, manager of the Tamworth Co-op’s Stretton store, who presented a cheque for £555 to Mr Goodman on behalf of the trust, said: “We’re delighted to be able to support the trust in preserving history for future generations and giving its fundraising efforts a boost.”

The Grade II* listed station was opened in 1885 to pump sewage from Burton to farmland about three miles away. The bulk of the effluent was waste from Burton’s many breweries. In its heyday, its steam-powered engines worked round the clock, throughout the year, pumping 4.5 million gallons a day. It closed in 1971, but was subsequently restored by volunteers.

Today it is a working museum which has won several awards and attracts thousands of visitors from all over the world. In April 2016, the Duke of Gloucester unveiled a plaque in one of the engine rooms, recognising the work of the dozens of volunteers involved in the ongoing restoration and running of the former Burton Corporation Pumping Station.