Tamworth Co-operative Society is now recycling surplus food from its stores for redistribution to people in need in the community, including the homeless and elderly.

Crates of leftover fruit, vegetables, bread, cakes, biscuits, cereal and dried products are being sent off each day to reduce wastage and feed the hungry and vulnerable. 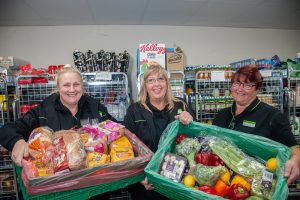 Following a successful trial at Glascote Co-op, the Society has now rolled out the scheme to its ten other convenience stores in Bolehall, Dordon, Dosthill, Kingsbury, Lichfield, Polesworth, Rosliston, Stretton, Whittington and Wood End, plus the Co-op supermarket in Tamworth town centre.

Items, which are either reaching their best-before date, or have not been sold at the end of the day, are removed from shelves and separated out into red and green trays. The food is then collected by drivers delivering fresh supplies in the morning and taken to a warehouse in the Midlands. Here it is sorted again and then given to local charities including homeless hostels, before and after school clubs, drop-in centres, day centres and lunch clubs for the elderly, rehabilitation centres, community cafes and domestic violence refuges.

Tamworth Co-op has joined Central England Co-op in donating its excess stock to cut down the amount of food that gets thrown away.

Dan Welsh, general manager of Tamworth Co-op’s food division, said 25 per cent of the waste from its stores was now being distributed by the FareShare charity to community groups in the region.

He added: “We try to minimise wastage as much as we can, but a certain amount is inevitable because we cannot totally predict what our customers are going to buy. It seems so wrong to get rid of perfectly good food.

“It was a no brainer for us to join the scheme with Central England Co-op. It works well and is a great way to get surplus food out of stores. Before it was all going in rubbish bins and then to landfill.”

At the moment the project is unable to accept any animal by-products, such as meat and eggs, but it is hoped that this may become possible in future. Any food that has passed its use-by date, or food which has already been cooked or prepared also cannot be taken.

Groups which have benefited in the Tamworth area include Queen Elizabeth School, Barnardo’s and Grendon Lunch Club in Atherstone, along with Talent Match, helping young adults into employment, and Minster Hall in Lichfield.