Tamworth Co-operative Society arranged the funeral of James Frow, a much loved and talented golf professional, on July 13, 2017.

James Frow, a PGA golf professional based at The Belfry, died peacefully at the age of 34 during the early hours of July 2 after a long battle with a brain tumour.

His wife Emma paid tribute to the special man ‘she was so proud to marry.’ She spoke not just of his courage, but his ‘kind, gentle and genuine ways.’ 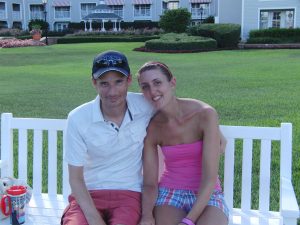 James Frow and his wife Emma.

“James was a private person, very reserved but with a great sense of humour. He loved life and travelling and was so brave. He especially liked quiet nights in. He just wanted to live a normal life and that’s exactly what he did despite everything.

“He was still working ten weeks ago, and just eight weeks ago we were on holiday in Spain together. He was very weak at that stage, but still laughing and still wanting to go out for a steak.”

James moved to Tamworth from Grimsby in 2003 to take up a dream job at The Belfry. He came to call Tamworth  ‘home’, but never lost his love for Grimsby Town F.C. In May 2017 he managed to get to Wembley to see the Mariners beat Forest Green 3-1 and win back their league status.

“When Tamworth played Grimsby at home, he used to joke that he was such a big fan he had walked to away games,” said Emma.

Whilst growing up in Grimsby, James was a talented footballer and cricketer, but it was golf that became the biggest focus in his life. He took up the game as an 11-year-old and went on to captain the junior side at Waltham Windmill Golf Club. He attended Fairfield Primary School and then Toll Bar School in Grimsby. 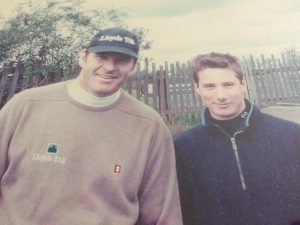 James’ golfing highlights included two holes in one – the first as a junior and the second when he was older.  He played with Sergio Garcia as part of a Belfry event and previously met his idol, Nick Faldo. He also caddied overseas for a professional woman golfer.

He was first diagnosed with a brain tumour in 2008 and went on to have three operations, the last one in 2016. Although his illness took a toll on his playing career, he was able to continue his big love of teaching golf at The Belfry.

“He loved teaching golf, and he was also brilliant at helping people to choose the right equipment which was also part of his job as a PGA golf professional,” said Emma.

The two met at an office party at The Belfry where Emma also worked as a chef.

“He said he had seen me, but the first time I saw him was at that party. We were together for 12 years and got engaged during a firework display in Epcot, Florida. He had planned the whole thing as a surprise.” 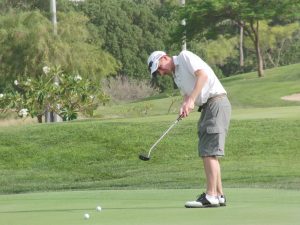 The couple bought a house in Basin Lane, Tamworth in 2007 and were married at Drayton Bassett in 2011.

“I’ll miss him so much. He always bigged me up and made me feel special. I have so many memories of him and was proud to have been his wife.

“When I left him just after he had died I said: ‘I’ll see you soon – but not too soon.’ That’s just what he would have wanted me to say.”