A South Derbyshire pre-school has received a much-needed cash injection after sending out an SOS to Tamworth Co-op which owns a food store in the area.

Rosliston Under 5’s Pre-School, which was formed 40 years ago, feared for its future when all fundraising activities had to be cancelled as a result of the pandemic.

Manager Kirsty Brown says it was the most challenging period in its history.

“Our funds were massively depleted and as a result we only just had enough money to cover our basic running costs. There was nothing left over to buy important things such as art and craft kits, stickers, pens, glue, and even baby wipes.

“It’s been a very difficult time for us, so we decided we needed to take action and approach the local community for help.” 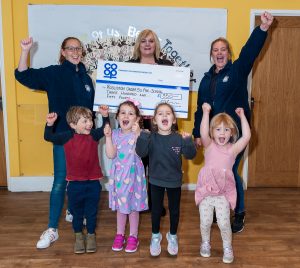 Kirsty sent out pleas to local businesses including the Tamworth Co-operative Society which operates the Rosliston Co-op convenience store. In her letter she explained that the group, which is run as a charity, urgently needed support:

“We have over 30 children still on our books, but with families struggling to pay for childcare, these children have missed out on so much. We are seeing a big difference in them when they start, with poor speech and social skills. We are doing our best to support families and their children, but we are struggling to stay afloat.”

Soon afterwards she received a heart-warming reply from Tamworth Co-op’s chief executive, Julian Coles, saying a cheque was on its way.

“My board was very touched by your e-mail and we noted the Amazon ‘wish list’ detailed on your Facebook page,” he wrote.

“I believe that £350 will go a long way towards the remaining requirements on that list. This money has come from the Rosliston Co-op convenience store via our Community Dividend Scheme which raises thousands of pounds each year for worthwhile causes. The funds are raised from shoppers donating the dividends they have earned on purchases at our various branches.”

She said: “It’s a privilege to be able to help an organisation in the village which has been of great benefit to local children and parents for the past 40 years. The group has been through an exceptionally challenging time, but hopefully it will continue to thrive for many more decades to come.”

Kirsty says she was ‘absolutely delighted’ by the positive response

“We’d like to say a massive thank you to Tamworth Co-op for this fabulous donation. Everyone at the pre-school has been overwhelmed with how the community and local businesses have helped us so far in our fundraising. We are truly grateful. Thank you from all the staff and the children.”

The pre-school continues to appeal for support as it recovers from the effects of the pandemic. Any individual, business or community group willing to help can email roslistonunder5s@gmail.com

The pre-school currently has its full allocation of children, but more spaces will be available from September.