Tamworth Co-operative Society has invested £400,000 in three high-performance cars to serve its clients. But even though the vehicles have a top speed of 155mph they will rarely leave the slow lane. In fact most days they will be driven at a stately 20mph. 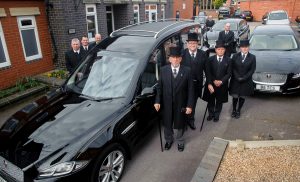 Tamworth Co-op funeral staff pictured with the new fleet at the division’s headquarters in Upper Gungate.

The British made Jaguars have been bought by the Society’s funeral division from a firm which has been supplying hearses to the Royal Family for generations.

Luxury models similar to the newly acquired XJs have been used for the funerals of the Queen Mother, Princess Diana and Princess Margaret, as well as Baroness Thatcher.

Glen Speak, deputy manager of the funeral division, said the acquisition was aimed at delivering the best possible service to the families in its care. 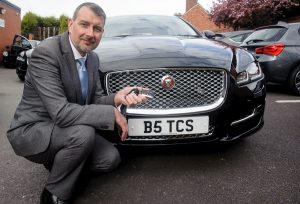 “Our mantra is that Tamworth deserves the best and that’s one of the reasons we have chosen these cars. They are said to be the world’s finest and most beautiful vehicles of their type and we certainly agree.

“Investing in such a high quality fleet also makes sense economically as we see this as a long-term investment which will enable us to maintain fair and reasonable prices,” he said.

The two limousines and a hearse replace older Jaguars which will now be sold to make space for the new arrivals. They will be used for funerals at all of the Tamworth Co-op’s branches covering a wide area of the Midlands, including Tamworth, Coseley, Great Wyrley, Heath Hayes, Pelsall, Uttoxeter and Woodville. 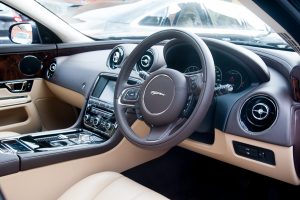 Only the best for Tamworth families – the stunning interior of the Jaguar XJ.

Making sure they are kept immaculate will be the responsibility of a team of dedicated staff, headed by garage supervisor Carl Salat, who also look after two other funeral fleets.

“They are his babies – he’s absolutely meticulous about looking after them,” added Mr Speak.

Meticulously crafted, the beautiful wooden deck of the hearse even has LED lights to subtly illuminate the coffin.

“Cleaning them is a bit like painting the Forth Bridge – when you’ve finished at one end, then you have to start again at the other end. They constantly have to clean the funeral cars and wax and polish them to ensure they are in tip-top condition for each service.”

The specially modified, handcrafted aluminium vehicles, with three-litre engines, have been supplied by Wilcox Limousines which has been manufacturing hearses and other funeral vehicles since 1948.

Each one was cut in half and then rebuilt with a tall frame/fibreglass shell, added for the hearse, and a middle section for the limos to provide three rows of seats. The deck of the hearse also features LED lights which light the coffin.