A Tamworth charity fighting to alleviate poverty on its own doorstep has been handed a cheque for £1,500 – enough to feed more than 400 people.

The money was raised by Tamworth Co-op’s Cash in a Bag scheme which ringfences money raised from selling plastic shopping bags for good causes in the area.

Tamworth Foodbank was founded in 2011 by local churches and community groups working together to eradicate hunger in the town and surrounding areas.

In the week running up to Christmas the charity helped to feed around 450 people needing emergency supplies. Its project manager Emma Coates says the New Year period is looking equally bleak for many local families.

“There are people throughout the Tamworth area in places, such as Glascote Heath, Stonydelph and Wilnecote, who are in dire need of help,” she said. “There was an £86 cut in Universal Credit in October and, with the cost of gas and electricity in danger of doubling, we are very concerned for the welfare of many people going into 2022.” 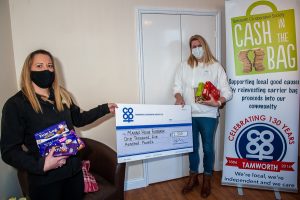 The organisation is based at Manna House in Glascote and operates on a referral only basis, ensuring that help reaches those most in need. Its partners include Tamworth Borough Council, local GPs, community groups and housing associations.

People are issued vouchers which they can bring to the foodbank to exchange for goods.

“On average throughout the year we support around 20 people every day, but during the Christmas and New Year periods the numbers rocket. In the run-up to Christmas we also gave out festive treats along with staple food including chocolates, biscuits and toys,” Mrs Coates explained.

Tamworth Co-op also donated nearly £800 to the foodbank from its Community Dividend Fund in 2021.

“They have been brilliant to us for many years,” added Mrs Coates who leads a team of 27 volunteers and six warehouse staff.

“I know that Tamworth Co-op helps a lot of other organisations in this area, and we are greatly appreciative of what they have done for us.

“When we were formed some people questioned if there was a need for a foodbank in Tamworth and over the years we have proved beyond any doubt that there most definitely is.”

Jayne Cutforth, manager of Tamworth Co-op’s Glascote convenience store, presented the cheque during a visit to the foodbank.

“It’s been eye-opening to hear how some people in this area find it difficult to even afford food,” she said.

“When you think of poverty you don’t often think of it being so close to home, but it can happen to anyone. It’s a great pleasure to be able to support the wonderful work being carried out by Tamworth Foodbank. It is a remarkable charity with remarkable people.”

The charity relies heavily on food donations at various supermarket collection points, but is constantly in need of help from businesses and others to help it keep the building open.

Updates on the type of food required are posted on Tamworth Foodbank’s Facebook page. For more details email info@tamworth.foodbank.org.uk