A group of South Derbyshire scouts will be heading off to camp with new tents to keep them dry, thanks to kind-hearted shoppers.

Customers at the Co-op convenience store in Rosliston have raised £646 for Seales and Linton Scouts by giving up the dividends earned on their purchases.

The money will be spent on replacing old camping equipment used by around 70 beavers, cubs and scouts, aged six to 14, to give them experience of being outdoors in all weathers.

The store is run by the Tamworth Co-operative Society which will be handing out nearly £10,000 to more than a dozen good causes over the coming weeks from its Community Dividend Fund. 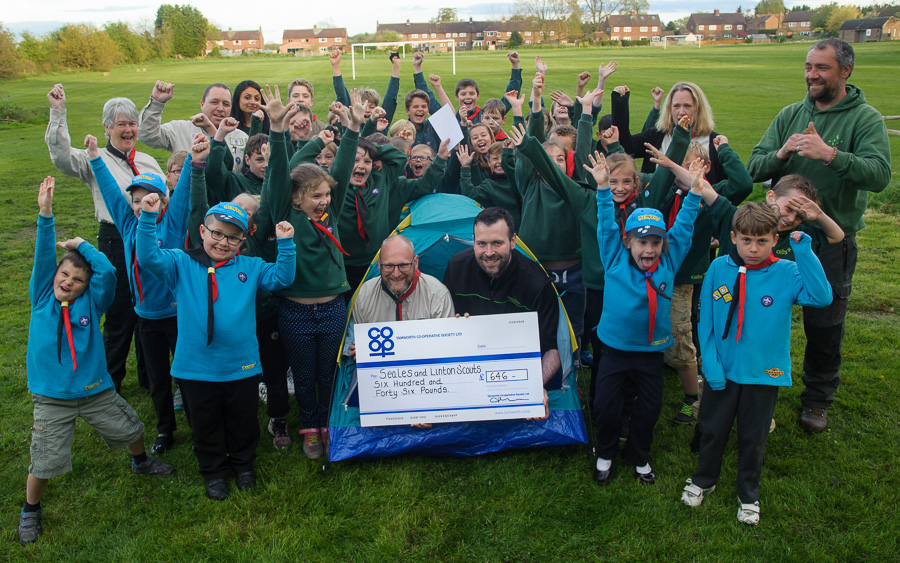 Neil Wakelin, manager of the Tamworth Co-op convenience store in Rosliston, presents the cheque from the Community Dividend Fund to Seales and Linton Scouts group leader Andy Winebloom, cheered by the cubs, beavers and scouts and volunteers.

Andy Winebloom, the group’s scout leader, said: “Some of our tents we’ve had for quite a while and were due for replacement, so we really are grateful to the Co-op and its shoppers for this money. We rely on donations to try to keep the kids’ subscriptions as low as possible.”

As well as regular camping trips, the youngsters, including boys and girls from all faiths, enjoy a range of activities, such as climbing, abseiling, archery and rifle shooting. They also camp out every January for a ‘chilly challenge’ to get them used to coping with harsh weather.

Rosliston Co-op store manager Neil Wakelin said: “Each year we invite customers at our various branches to donate their dividends to a local organisation. It’s nice to know that this money will be put to such good use.”

Cub scout leader Val Shaw, a retired teacher, is one of eight adult volunteers involved in the group which meets twice a week at the scout hut in Strawberry Lane, Rosliston. She urged others to volunteer their help.

“You get out so much more than you put in from seeing the pleasure on the children’s faces and giving them opportunities they wouldn’t normally do. They learn to work as part of a team and support each other,” she said.

Anyone interested in joining the Seale and Linton Scouts as an adult volunteer can contact Andy Winebloom for more information by emailing him at andywinebloom@aol.com or ringing him on 07845 959697.