People recovering from strokes are to benefit from a valuable  physiotherapy aid, thanks to the Tamworth Co-operative Society. A £783 cheque from the Society will enable the Step Forward Stroke Support Group to buy an ‘Able X’ – a piece of exercise equipment which can help people to recover movement in their bodies. 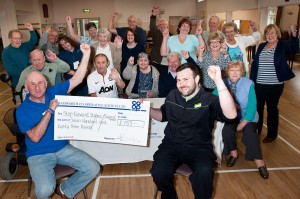 Step Forward started out as an eight-week project supported by the Stroke Association. It proved so successful that it just carried on and today has around 40 members.

The group’s motto is ‘there is life after a stroke’ and chairman Ian Rose says the donation from the Tamworth Co-op’s Community Dividend Fund will enable members ‘to regain what they have lost.’

The group meets every other Friday at Whittington Village Hall. In addition to receiving support and advice, members enjoy a range of social events including trips to theatres, restaurants, fish and chip suppers and talks by guest speakers.

“Not everything we do concerns strokes,” said Ian. “We even had a fascinating talk recently on the Gurkhas.

“Laughter plays a great part in the healing process too. If it wasn’t for groups like this, people could find themselves abandoned at home for a very long time after suffering a stroke.”

The support group serves a wide area including Tamworth, Lichfield, Burntwood and Cannock.

“We won’t turn anybody away, no matter where they live,” said Ian.

“Friends and family members are also welcome to come along with them.”

The cash for the Step Forward Group was raised by shoppers at the Tamworth Co-op’s convenience store off Easter Avenue, Lichfield, donating the dividends they earned on purchases.

“We’re very grateful to the Tamworth Co-op and to all their customers who helped us,” added Ian.

“It’s just fantastic to receive this amount of money.”

Handing over the cheque to the group, Neil Wakelin, manager of the Lichfield Co-op store, said he was delighted the money was going to such a ‘brilliant’ cause.

“This group plays a vital role in the community and I’m delighted to have been able to hand them a cheque on behalf of the Tamworth Co-op,” he said.