It was standing room only at St Editha’s Church as hundreds of people united to pay a candlelit tribute to lost loved ones during Tamworth’s annual Christmas Memorial Carol Service.

The event, organised by Tamworth Co-operative Society’s funeral division and Bereavement Advice Centre, was originally intended to bring comfort to the recently bereaved. However, it has proved so popular it is now a main highlight of the town’s festive calendar. 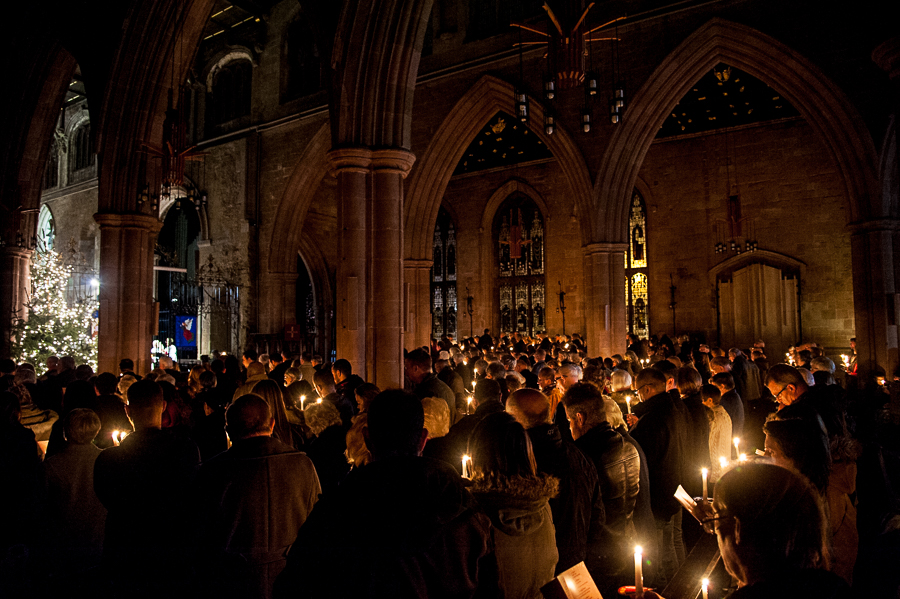 Hundreds of people took part in the candlelit tribute to lost loved ones at St Editha’s Church, Tamworth.

A sea of candles illuminated the vast interior of the historic church as the packed gathering remembered their relatives and friends in silence.

A lone Scottish piper, Alan Hillier, continued the tradition of welcoming young and old outside the church. He also played his bagpipes during the most poignant part of the ceremony.

whose recital of A Christmas Story was well received. There were fine performances too from soloist Tom Clamp and the Tame Valley Learning Trust Choir.

Among the guests were Tamworth’s deputy mayor, Councillor Peter Thurgood, and representatives of St Giles Hospice. 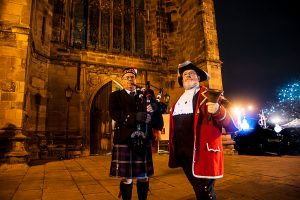 Reverend Alan Gordon, vicar of St Editha’s, spoke of ‘the common bond’ he and all people share as human beings when losing someone special.

Amanda Woodward, general manager of the Society’s funeral division, opened the service and later read a poem, as did her colleagues, Paul Warwick, Linda Sanderson and Sue Owen.

“We’ve seen the numbers of people attending grow and grow,” said Amanda. “There was such a feeling of warmth and goodwill in the church.”

Hundreds of goodie bags containing free gifts, such as candleholders, notebooks and pens, were handed out.

In his closing address, Tamworth Co-op chief executive Julian Coles praised the funeral staff for organising the evening and ‘for being there when we need them.’

“I do find this to be the most rewarding and meaningful event in our annual calendar. There is something incredibly moving about this evening,” he added. 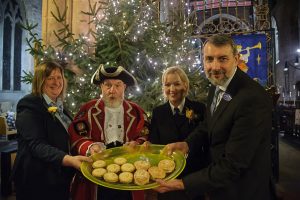 Town crier Ken Knowles is treated to a mince pie by Tamworth Co-op funeral staff. Pictured with him (from l-r): are Cheryl Dutton, Amanda Woodward and Glen Speak.

A collection was taken, with the proceeds to be split between St Editha’s and St Giles Hospice. There was also a free prize draw to win one of two Christmas hampers. At the end complimentary mulled wine, orange juice and mince pies were served in St George’s Chapel.”

Karen Hardie came along with her family, including her sister Hazel Roberts who had travelled from Wales. They were remembering their mother, Ceinwen West, from Bolehall, who died aged 77 in August 2017.

Karen said: “It’s very hard this Christmas, but it has really helped being here with people who have also lost others.”

Colin Wood stayed behind afterwards with his wife Jane to spend some time in quiet reflection. They were remembering her mother, Dorothy Hair, from Glascote, who died aged 85 in October 2017, and his mother, Phyllis Wood, who worked on the tills at Tamworth Co-op supermarket for many years.

He said: “I think we will come here every year for this. It’s such a nice and moving service.”