Tamworth Co-operative Society customers bagged a remarkable five out six prizes up for grabs in a nationwide competition. 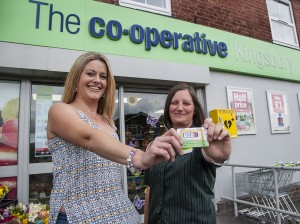 Victoria Smith (left) receives her prizewinning card, which will help give her a bill-free year, from Emma Horsham, Kingsbury Co-op manager.

Managers say the success was down to excellent promotion of the PayPoint and Co-operative Food competition involving around 2,900 Co-ops.

Five shoppers won £1,500 each towards their household bills in the coming year, including two from the same store in Lichfield.

The other winners included a woman who gave her last £8 after a day out to a homeless man who then predicted she would enjoy good fortune.

The competition was open to people who use PayPoint at Co-op food stores and was aimed at raising awareness of how it can be used for household bills, mobile phone top-ups and energy meter transactions.

The Tamworth Co-op was the only one to promote the draw on its PayPoint receipts which ensured shoppers got the message. Entrants had to text a number on their receipt to be put into a draw for one of the prizes.

Bob Read, manager of the Tamworth Co-op food division, said: “I’m absolutely delighted that our customers won five out of the six prizes, out of about 2,900 stores which were involved in the competition.”

The winners were mother-of-two Victoria Smith who helped the homeless person and entered the draw at the Kingsbury Co-op; support worker Sharon Guy who faced redundancy when she decided to have a go at the competition at the Tamworth Co-op supermarket; and Rosliston Co-op shopper Linda Coulton who feels the cold terribly after being diagnosed with cancer. She will now be able to heat her home through the winter.

The win for the two Lichfield shoppers couldn’t have come at a better time. Craig Fitzpatrick is an unemployed expectant father and Anita Colley, a carer at a retirement village, has had to take time off work through sickness.

PayPoint enables householders to top up their electricity keys or gas cards for use in meters at their local shop. It can also be used to settle other bills, top up a mobile phone, pick up a mail order delivery, buy a TV licence, make purchases online or on the high street with pre-paid cards or eMoney vouchers, buy transport tickets and top up travel cards, and even pay for parking. 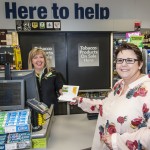 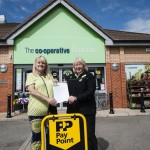 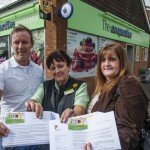