Kind-hearted shoppers have donated their loyalty rewards to help one of the oldest swimming clubs in the country – based in Burton – to develop the next generation of coaches.

Customers at Stretton Co-op in James Brindley Way gave up their ‘divis’ to raise £732 for Burton Amateur Swimming Club as part of an annual scheme run by the store to support local good causes. 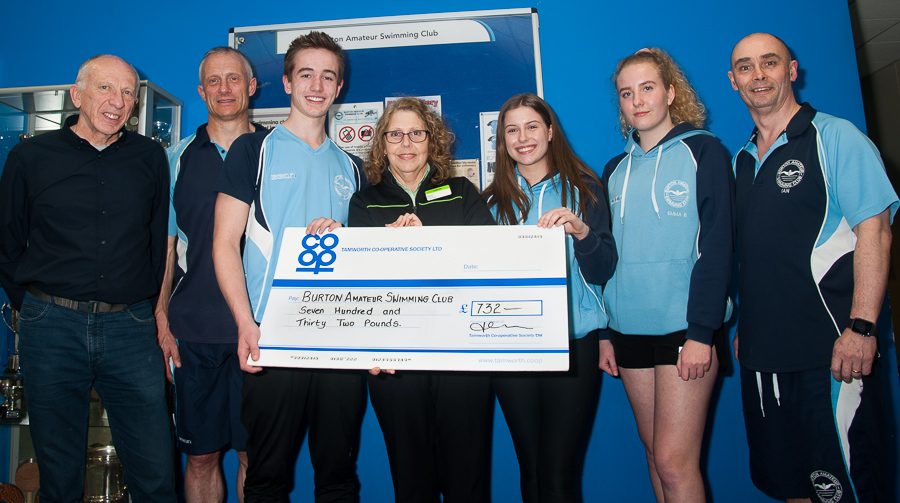 The money will enable the club, which was founded in 1878, to pay for coaching courses for some of the group’s older swimmers. The Stretton food store is run by Tamworth Co-operative Society, with the grant for the swimmers coming from its Community Dividend Fund. The initiative has supported many different groups in the Stretton area over the past ten years.

BASC has 190 members, aged seven to 18, who train each week at Burton’s Meadowside Leisure Centre and Repton School Sports Centre.

Some of the cash will also be used to buy an iPad to video the young swimmers and show them how they can improve their strokes.

Marina Hutton, manager of the convenience store, said “I’m delighted that we’ve been able to raise a large amount of money for such a deserving cause and that this money will help bring on new coaches, who can act as role models to the young ones, as well as help the swimmers to improve their technique.”

Joint head coach Simon Ward said: “Everyone here is a volunteer and we rely on help from the community to develop our young swimmers, so it’s absolutely brilliant to get this donation. We can’t thank the Co-op and the shoppers enough for their generosity.

“This year we won the East Staffordshire Junior Team of the Year title for the second time in four years and we have a waiting list of children wanting to join.”

Vice president of the group, Brian Brooks, said the youngsters regularly compete in galas and leagues all over Staffordshire, Derbyshire and Leicestershire.