For nearly a century he was just a number. Lying in an unmarked grave, his identity was hidden from public view. 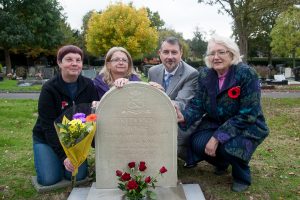 Buried in grave 1118 in Amington Cemetery, countless visitors walked by unaware of the bravery and sacrifice of one of our own.

This was the final resting place of a soldier, from Tamworth, who survived the horrors of the First World War only to succumb to sickness months after being demobilised at the age of 23.

He died of acute meningitis, believed to have been brought about by gas poisoning while on active service, on September 1, 1919.

Leaving behind a young widow without a breadwinner, the ex-private was put in a pauper’s grave and consigned to anonymity. 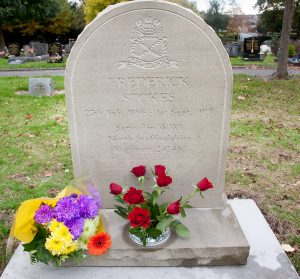 But now, on the eve of Remembrance Day, a beautiful headstone has been erected in his honour and inscribed with his name – Frederick Arthur Stokes.

The unveiling of the memorial marks the culmination of a quest by former Mayoress of Tamworth and local history enthusiast Diane Wells to trace his relatives and celebrate his life.

After an appeal in the Herald, several descendants came forward, including great nieces Julie Hughes and Angela Mason. Tamworth Co-op generously agreed to donate the grave monument and Tamworth Borough Council waived its charges to put it in place.

Made out of sandstone, it also records Frederick’s service in the Great War with the North Staffordshire Regiment and when he was born and died. 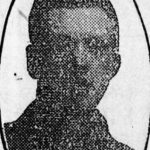 The only known photograph of Frederick Stokes, taken from an obituary in the Tamworth Herald.

Both his great nieces paid their respects by laying a bouquet of flowers at the grave. They were joined by Mrs Wells who found out about the unmarked plot during a project, involving the 6th Tamworth Scouts (Amington), to restore Amington War Memorial.

Mrs Hughes, from Belgrave, said: “It is so nice to see that finally he’s got a proper resting place. It’s beautiful and even has his army number on it. We can’t thank the Tamworth Co-op and Diane enough. It’s good to finally have closure with it.

“We had no idea he was buried here or even that he existed until we read the appeal in the newspaper and realised we were related through my mother Margery.”

Born and bred in Fazeley, Frederick Stokes was the fourth and youngest son of Charles Stokes and Mary Boulstridge. His father was an assurance agent and parish clerk. The family lived at number 48, Coleshill Street.

Frederick enrolled on June 22, 1916, shortly after he was married, and went to France three months later. He was gassed several times while fighting the enemy. His last engagement was in the key battle of St Quentin in the final weeks of the war in 1918 when the British crossed a canal to breach the Germans’ defensive line.

Frederick worked as a grocer’s assistant in 1911 and later became a potter with  George Skey and Co in Wilnecote. He was demobbed on March 22, 1919. He died at the Pretty Pigs Inn, Amington, where he was living with his wife Grace.

Mrs Wells, who laid red roses at the grave, said: “He’s gone from being anonymous to being recognised as a person again which is wonderful for the family. While we don’t know where else Frederick Stokes served, we can be sure he would have been involved in trench action, exposed in No Man’s Land and subjected to enemy fire, snipers, shelling and gas attacks. It’s a fitting tribute to his memory.”

Glen Speak, deputy manager of Tamworth Co-operative Society’s funeral division, said: “When we read about this tragic story, we just felt we had to help give Frederick Stokes a proper gravestone. It is heart-breaking to think that he must have returned home, so relieved to have done his duty and survived, only then to die a few months later. We hope this headstone goes some way to honouring his memory and what he did for his country.”