Tamworth Co-op’s general funeral manager, Amanda Woodward, has been appointed president of the British Institute of Embalmers – an internationally revered institution with branches in several countries.

As head of Tamworth Co-op’s funeral division, Amanda can already boast a successful career, but she regards her appointment as the BIE’s figurehead as the biggest professional honour she has ever had. 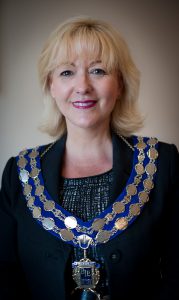 Amanda Woodward wearing her chain of office as the newly appointed president of the BIE.

For someone whose burning ambition as a schoolgirl was to be an embalmer, it’s fair to say she is on cloud nine.

“I would never have thought in a million years I would ever be in a position to even put myself anywhere near the process of getting elected president of the BIE,” she says.

“In the corporate world, it was very difficult to become an embalmer for a woman when I started out in the funeral industry in 1983. I was told women just don’t do things like that. People didn’t want me to do it.

“They thought it was a waste of money and time, and that I should be in the kitchen, not the embalming room. That was what I was told. So I thought right I’ll show you. I’m doing it whether you like it or not, and paid for it myself.”

First she had to pass an entrance test to become a student member of the institute, travelling from her home in Coalville to Birmingham to attend the Midlands School of Embalming. This was followed by two written examinations and a practical which involved her father John accompanying her to London with all her equipment.

After passing the two notoriously tough exams involving both the theory of embalming and a practical demonstration of her skills, Amanda finally qualified.

“In those days you also had to go to either London or Manchester for the final practical, so off I went with my dad again with all the equipment,” she recalled.

“He really helped and encouraged me so much.”

Her determination paid off, but it was quite a feat. “You have to know every artery and every vein name to qualify as an embalmer and they are all in Latin.”

The training is said to be equivalent to that undergone by a fourth year medical student, such is the detailed knowledge of anatomy required.

Preserving a body for the family to see is not a job for the faint-hearted, especially if the death was traumatic. Part of an embalmer’s skills involves reconstructing features, but this is where the challenge lies, says Amanda. 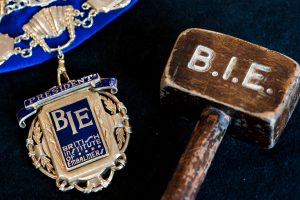 A close-up of the BIE president’s chain of office and historic gavel.

“You need to present them back to the family in the best way you possibly can to allow them to pay their respects. You get such satisfaction out of being able to give the family that opportunity to say their final farewells.”

After qualifying Amanda was very pleased to join the Tamworth Co-operative Society in 1992 and just four years later was appointed head of the funeral division.

Having cleared so many hurdles to become an embalmer, it is no surprise that the BIE – celebrating its 90th anniversary in 2017 – subjects its candidates for the presidency to an equally vigorous selection procedure. It is known worldwide for its high standards and membership is coveted.

Amanda first had to be nominated by the organisation’s Midland division, which she chairs, and then competed with a senior male figure from the American division. After both candidates gave presentations on what they would bring to the role, she was elected at the national AGM in Harrogate.