Amanda Woodward is moving to Spain to start a new life in the sun with her husband David after leading her team thorough a time of unprecedented change in the funeral industry.

Tamworth Co-op’s chief executive, Julian Coles, paid tribute to her, saying she had always provided exceptional leadership, especially during the ‘two very challenging years when we were so significantly affected by Covid-19.’

“During her time here, Amanda has constantly been at the forefront in terms of introducing change, enabling families to have much greater choice and flexibility when organising funerals. She sets extremely high standards and is very hard working and hands-on,” he added. 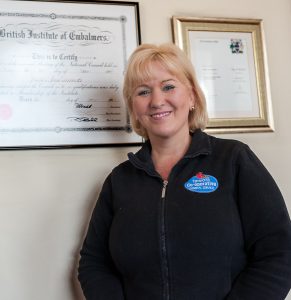 Amanda Woodward who is retiring as general manager of Tamworth Co-operative Society’s funeral service at the end of March 2022.

“She would often tell me the next day of ‘2am moments’ where she would wake up in the middle of the night having thought of a new idea.

“She will be greatly missed by everybody at the Society, and we send our sincere thanks and warmest wishes for her retirement.”

When Amanda (55) first arrived in Tamworth in 1992 the funeral division consisted of an office in Upper Gungate and a small branch in Atherstone. It has greatly expanded under her watch and now employs more than 40 people across funeral homes in Tamworth, Uttoxeter, Woodville, Heath Hayes, Pelsall, Coseley and Great Wyrley.  The main premises in Upper Gungate have also been hugely extended and improved to include a full catering service with a licensed bar.

In 2011, she was instrumental in setting up the pioneering Bereavement Advice Centre which will soon move to a new location in Colehill as part of the town centre redevelopment project.

“One of our major aims was to dispel some of the fear and mystery surrounding bereavement and funerals in general,” she said. “The bereavement centre has achieved that for many people. It also provides a lifeline to those devastated by the death of a loved one.”

In more recent years Amanda has also been delighted to see the Society’s annual Christmas Carol Concert and Memorial Service become established as a main highlight of the town’s festive calendar. The event, held at St Editha’s Church, attracts hundreds of people who are not just invited to embrace the festive spirit, but also to celebrate lost loved ones together. The most poignant part of the service is when the church is lit with a sea of tribute candles.

Reflecting on her long career, Amanda clearly remembers turning up for her job interview as a young woman. She was ‘full of butterflies’ as she waited to be grilled for the job of deputy funeral manager.

In an ever-increasing state of terror, she found herself positioned at the head of the table facing questions from a mainly male board. Feeling way out of her depth, she was convinced she would never get the job let alone be promoted to general manager just four years later.

One of the interviewers was senior manager John Leonard Scriven who was to have a huge influence on her career. He died at the age of 85 in 2015 and Amanda led his funeral cortege dressed in her finest formal regalia.

“I had to ensure that he had the perfect funeral as it was the final thing I could do for him,” she recalled.

Amanda says the biggest change she has witnessed in the funeral industry is the sheer scale and flexibility of the services offered.

“At one time the only choice was a traditional funeral service on a religious theme. Some people still want that, of course, but today a funeral can include just about any conceivable aspect a person might request. They can even have their ashes dispersed by fireworks.

“Instead of a hearse, some people prefer to be taken on their final journey in a vehicle which has some significance to their life. This could be a camper van, a fire engine or a motorcycle and sidecar.”

One of the most surprising requests she received was to have a coffin built in the shape of a skip for a scrapyard owner.

Being made national president of the Co-operative Funeral Service Managers’ Association was a significant milestone in Amanda’s career. She was only the second woman in its history – dating back to the 1940s – to hold the position. 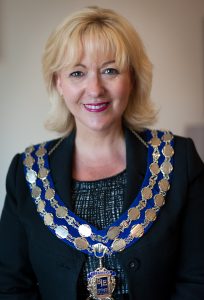 Amanda’s proudest moment was being appointed President of the British Institute of Embalmers in 2017.

But her proudest moment of all was the day in 2017 she was named president of the British Institute of Embalmers, a prestigious organisation which also operates several Divisions overseas.

“That was the moment I finally broke through the glass ceiling of a traditionally male-dominated world. In the corporate world, it was very difficult for a woman to become an embalmer when I started out in the funeral industry in 1983. I was told women just don’t do things like that.

“So, I thought right I’ll show you. I’m doing it whether you like it or not and paid for it myself.”

During her year as president, Amanda clocked up thousands of air miles, even travelling to Australia as part of her official duties.

Prior to moving to the Tamworth Co-op, she worked for a different funeral firm in Leicestershire where she started out as a 16-year-old receptionist.

One of her most bizarre experiences professionally was when she had to exhume a monk from Mount St Bernard Abbey in Whitwick. The monk had been buried for more than 40 years, but his bones needed to be sent to Rome for canonisation. Amanda was also a member of the funeral team which had the sobering task of handling the Kegworth air disaster in a supportive capacity.

On the lighter side, Amanda still smiles at the memory of seeing flowers bearing the name MOM inadvertently placed upside down in a hearse

“It pulled up in front of everyone outside the church and I’m not sure the word ‘WOW’ was very appropriate, but thankfully the family saw the funny side too. They realised that, whilst we always strive to handle things in a correct and respectful way, we are also human beings.”

Her toughest days in the funeral industry have come recently.

“The pandemic has been the most challenging period of my life. Even though we braced ourselves, it was still like being hit by a tsunami.

“We didn’t know what to expect and you could sense the fear amongst the staff. In the industry there was talk of limited coffin supplies and the prospect of mass graves which thankfully never happened. But it was an incredibly tough period and there were times when we took in very significant numbers of people who had died from Covid.”

As key workers, she said the staff had no option to work from home where it was easier to keep safe.

“There was no possibility of furlough for our staff either. I think the hardest single thing of all was being restricted in helping people in a personal way at a time they needed it most. We couldn’t physically go near families or welcome them into our catering suite. That went completely against the grain in a caring profession. We felt desperately sorry for people and felt their pain. It weighed heavily on us all.

“Families were only allowed to have six mourners at a funeral service. There were no limousines at times, no singing and no hymn sheets.  On some occasions there were no ministers either because of the need to isolate.  Family members were distraught that they were prevented from attending funerals of loved ones. I’ll never forget seeing security teams employed at crematoriums to ensure the rules were not broken.”

“Instead of managing the business from a distance, I was back attending funerals and directly supporting families. I was doing the very things that attracted me to the funeral industry in the first place. In that sense it was very rewarding.”

On an optimistic note, Amanda said the situation at Tamworth’s main funeral home has ‘pretty much returned to normal.’ She says she will always look back with enormous pride at the way her staff coped throughout the pandemic.

“It has been incredible to work with so many amazing people. Honestly, I could not have been more privileged and proud to work with colleagues like that.”

“It has been the best organisation in the world I could have chosen to work for. The people, the values…just everything about it. 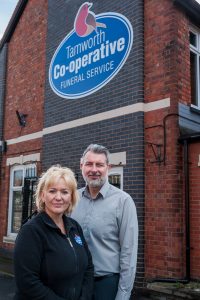 Amanda pictured outside the Upper Gungate funeral home with her deputy Glen Speak who will be taking over the general manager role.

“The chief executive, the management team, the board, the members and of course all the staff have been wonderful. It’s been such a special place to spend a large part of my life and I’ll miss it greatly. I can’t thank everyone enough. That also includes some incredible colleagues that are no longer with us – unforgettable people like Mr Scriven and my former colleague Bill Galvin.”

Amanda, who has a son, John, says that despite moving overseas she will visit her old colleagues whenever she can.  Once she settles in her adopted country, she is also thinking of using some of her professional skills in a voluntary capacity.

“I’d like to set up a bereavement support group over there for expats, and who knows I may even organise a Christmas event on similar lines to the one in Tamworth.”

Glen Speak, deputy general funeral manager of the funeral division, will take over as general manager from April 1st, 2022.

“Glen joined us in 2015 and I can wholeheartedly say that the future of the funeral division is in excellent hands,” added Amanda.