Tamworth Co-operative Society has been shortlisted for two national awards in the UK funeral world’s equivalent of the Oscars.

The Society has been nominated in the Good Funeral Awards 2017 for the Best Death Related Public Engagement Event. The nomination is for the setting up of a ‘pop-up’ shop in conjunction with St Giles Hospice to mark Dying Matters Awareness Week. The event was held in Tamworth town centre in May and helped to break down the barriers surrounding the discussion of death and bereavement. 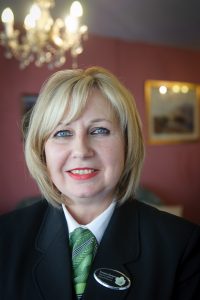 Funeral director Yvonne Harper who has received a nomination in the Good Funeral Awards.

Long-serving funeral director Yvonne Harper has received an individual nomination. The winners will be announced at a glittering ceremony in London on September 7.

Last year the funeral division won the category for the Most Significant Contribution to the Understanding of Death in recognition of its work supporting the bereaved – both through its Bereavement Advice Centre and events such as the annual Christmas memorial service in St Editha’s.

The Society also received a runners-up prize in the Best Funeral Caterer section and is keeping its fingers crossed that it can go one better this year by picking up two gongs.

The Good Funeral Awards ceremony is described as being a bridge between the general public and the much misunderstood funeral industry. Past winners have gone on to appear in the national media to dispel some of the myths surrounding what happens when we die.

Other nominees this year include a female gravedigger, a ‘soul midwife’ and the founder of the Oxford ‘Kicking the Bucket’ festival.

“We’re delighted to have been nominated again. It’s very much a quirky ceremony, with a distinct sense of humour to it, but with a very serious side. Winning a Good Funeral Award is very prestigious. We’re also delighted that Yvonne Harper has been nominated for an individual award. That in itself is a huge achievement for her. Not only is she a highly professional funeral director, she is also a very caring and sympathetic person.”