A dog rescue organisation which prides itself on preventing healthy strays from being unnecessarily put to sleep has received a whopping £808 cheque from the Tamworth Co-operative Society. Dun Roamin, of Dosthill, is a not-for-profit organisation which collects stray dogs on behalf of Tamworth District Council and East Staffordshire Borough Council. The animals in its care are vaccinated, kennel cough inoculated, micro chipped and health checked by vets. They are then housed with other dogs at Witherley Boarding Kennels and Cattery. The dogs are kept for an indefinite period of time until they are found suitable new homes. Ian Webb, who set up Dun Roamin in 2007, received the cheque from Sheila Villers, manager of the Glascote Co-op Convenience store in Glascote. The money was part of the Tamworth Co-op’s Community Dividend Scheme and was raised by shoppers at its Glascote convenience store donating the dividends they had earned on their purchases to Dun Roamin. 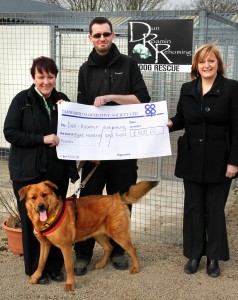 It was one of many cheques that will be handed out over the coming weeks to worthy causes. Each of the society’s individual stores supports a different community organisation. Mr Webb thanked the Tamworth Co-op for allowing the charity to benefit from the scheme. He also thanked shoppers who so generously donated their dividends to help lost dogs. “It is an unspoken motto of ours that we will never see a healthy dog put to sleep just to save time, space or money,” he said.