A Lichfield playgroup is to splash out on a paddling pool and a new set of toys, thanks to a generous donation from the Tamworth Co-operative Society. 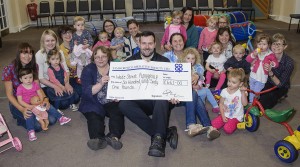 Neil Wakelin, manager of the Tamworth Co-op convenience store in Lichfield, hands over a cheque for £661 to Wade Street Church Playgroup in front of delighted group of organisers, mums and tots.

Wade Street Church Playgroup received £661 from the Society’s Community Dividend Fund, an amount which organisers say nearly made them ‘fall off their chairs.’

“It’s brilliant to get this much money,” said toddler group leader Rachel Bentley.

“It will really come as a boost to the children as many of the toys we currently have are in need of replacement,” she said.

“We can now bring in lots of new toys for them, plus an outside paddling pool which I’m sure they will love.”

The playgroup has been going for 20 years and is so popular that there is now a waiting list for some sessions.

Ann Richardson, Wade Street Church’s children and family worker, says the activities do not just unite tots but often parents and grandparents too.

“It’s a good example of the church working in the community,” she said.

“We would like to thank the Tamworth Co-op for this donation and also all their customers who generously donated their dividends to us at the Lichfield store.”

The cheque was presented to the playgroup by Neil Wakelin, manager of the Tamworth Co-op convenience store in Marks Walk, Lichfield.”

“It’s lovely to see so many young children having fun and learning at the same time,” he said.

“It was clear the playgroup were not expecting such a large cheque and it was wonderful to be able to surprise them in this way.”