Polesworth Abbey Scout Group has taken a major step closer to having a purpose-built home, thanks to the Tamworth Co-operative Society. The 24 beavers, 36 cubs and 35 scouts found themselves homeless when the land housing their old scout hut was sold for development. In recent times they have been forced to meet at temporary venues including Nethersole Primary Academy. 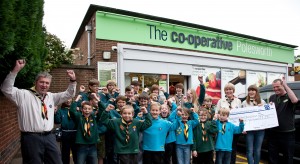 Caption: Karl Vyse, manager of the Tamworth Co-op’s Polesworth convenience store hands over a cheque for £1,295 to the Abbey Scout Group.

But their nomadic existence is set to end after a host of fundraising activities and grants have seen them close in on raising £170,000 for a new meeting hall. The new scout HQ will also benefit several other community organisations.
A large group of beavers, cubs and scouts recently visited the Tamworth Co-op convenience store in Polesworth to collect a cheque for £1,295. The money was raised from the Tamworth
Co-op’s Community Dividend Fund which enables shoppers to donate dividends earned on purchases to community groups.
Beaver scout leader Jo Horton said she was ‘overwhelmed’ by the support received from their local convenience store.
“This is a close but small community. To receive this amount of money has amazed us all. We are extremely grateful to the Tamworth Co-op and the people who donated their dividends at the Polesworth store.”
Karl Vyse, manager of the Polesworth convenience store, handed over the cheque to the group.
“Around 100 young people are part of this scout group,” he said.
“It’s a massive boost to them and other Polesworth organisations, not to mention future generations. We’re delighted for them and it was a great pleasure to hand over this cheque. They are so close now to having the building they deserve.”