A Tamworth Co-operative Society manager has taken part in a charity drive raising £10,000 for high-rise firefighting equipment in the wake of the Grenfell Tower blaze which claimed 72 lives.

Glen Speak, deputy manager of the Society’s funeral division, helped to organise the fundraising in his role as senior steward of the historic Acacia Lodge in London. The money was raised through collections and raffles.

Mr Speak, who is soon to become the lodge’s charity steward, described it as one of the most worthwhile projects he has ever been involved in. 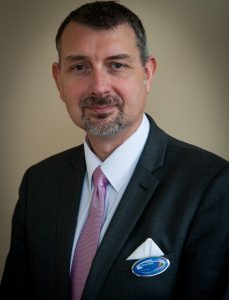 “The cause is hugely important as firefighters had been unable to reach people trapped on the upper floors of the block of flats because their hydraulic platforms couldn’t reach high enough,” he said.

“The lodge is the Freemasonry organisation for the funeral and embalming profession. Several members have attended major disasters such as the Kings Cross fire, as well as the Lockerbie and Kegworth air crashes.

“We are all very much aware of the terrible human cost of incidents like these and so we were pleased to raise such a large amount for this appeal, in addition to the other fundraising we do for national and local charities.”

Metropolitan Grand Lodge, which oversees Freemasonry groups in the capital, started the fund to raise £2.5m for two 60-metre high lift platforms. The target has now been reached, enabling London Fire Brigade to buy the appliances.

The specially built platforms will allow the fire service to access previously unreachable high buildings with stretchers, used by rescue teams to transport casualties, jets and other vital emergency aids.

Live feed cameras relaying video to the control unit in real time will also give fire chiefs on the ground more flexibility in directing operations.

Funeral director Terry Franklyn-Smith, Worshipful Master of the Acacia Lodge, presents a cheque for the money raised to Metropolitan Grand Lodge Charity Steward Tony Shields. Looking on is Glen Speak pictured (fifth from the right on the back row) with other members of the Acacia Lodge. The organisation is the lodge of the funeral service and allied trades, although it now welcomes members from many different professions. It meets four times a year at the Mark Masons’ Hall in St James’s Street, London.

Acacia Lodge was founded in 1910. Past members include Horace John Waters, better known as Jack Warner, the star of the long-running television police series Dixon of Dock Green which ran from 1955 to 1976. Jack Warner OBE was initiated into the Acacia Lodge in 1919 by his father Edward Waters, a founder member of the lodge. His family, Waters of Bow, were shroud makers, making him an ideal candidate for a funeral lodge.

The actor presented a crystal loving cup to Acacia Lodge, which is used at every installation of a new master.

Another well-known member was Horace Kirtley Nodes, master of the lodge in 1931. He was asked by the government to create a coffin for the Unknown Warrior in tribute to the fallen of the First World War. He arranged for the remains of an unidentified British soldier to be brought back from France to Westminster Abbey where the grave can still be seen today.