Tamworth Co-operative Society is among the first funeral operators in the country to sign the Fair Funerals pledge – demonstrating its commitment to providing a transparent and affordable service.

Funerals can be expensive and the process is often confusing. As a report from consumer champion Which showed in 2012, it can be extremely difficult to find clear, comparable information about the costs involved.

Bereaved people tend not to shop around for the best prices, and are often unaware of the huge differences in funeral directors’ charges. The burden of grief also makes them vulnerable as consumers.

The Quaker Social Action charity, which works to combat poverty, launched the pledge as part of its Fair Funerals campaign in June.

Amanda Woodward, head of Tamworth Co-operative Funeral Services, said: “We recognise many people struggle with the substantial cost of a funeral. That’s why we have signed up all eight of our funeral homes to the pledge.

“We are proud to be one of the first funeral firms in the UK to take this action. It is wholly compatible with our ethos of providing the very best levels of service at competitive prices. We help people find the best option for their budget.”

She stressed that the Society operates a clear pricing policy in keeping with the spirit of the new agreement. The Tamworth Co-op also offers an affordable simple funeral option. This inevitably has certain limitations, but still provides a dignified send-off which can be personalised to reflect the unique character and lifestyle of a loved one. 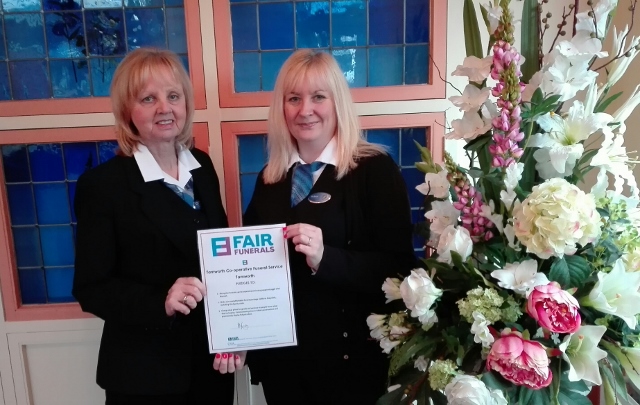 The Society’s funeral prices are already well below the national average. It decided to sign the pledge as a result of changes recently made to the National Association of Funeral Directors’ code of practice.

“These changes potentially remove a cheaper alternative to providing a cost-effective way of paying for a funeral,” added Amanda.

“This was the motivation that encouraged us to look to the Quaker Social Action organisation and its Fair Funerals pledge.

All Tamworth Co-op funeral directors, arrangers and managers are trained to discuss clients’ ability to pay for funerals. In cases of hardship, they will recommend the simple funeral option.

Around ten per cent of UK funeral directors have signed up to the scheme since its launch. They agree to:

• Recognise funerals can be expensive and many people struggle with the cost.

• Make their most affordable funeral package highly visible to the public, including third party costs.

• Charge clear prices for goods and services so that people know what they are buying.

Tamworth Co-operative Society is one of the last remaining, truly independent co-operatives in the UK. Founded in 1886, 2016 marks its 130th anniversary.

The Society is committed to giving something back to the communities it trades in. It has thousands of members across Staffordshire, Derbyshire and the West Midlands, who have a genuine stake in its business.

Sharing profits through members’ dividends is a founding principle of the co-operative movement. The Society also gives away thousands of pounds every year via its Community Dividend Fund.