Buying a copy of the Tamworth Herald turned out to be a fine investment for a Bolehall bank worker. Sue Cockeram spotted a prize draw in a Tamworth Co-op advertisement and ended up choosing a free £100 Roman outfit to wear at her sister’s wedding in August. 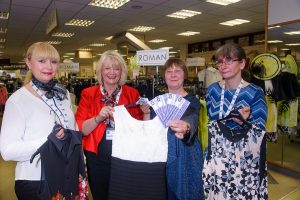 “I saw an entry form to win vouchers for Roman brand fashion clothes and decided to have a go,” she said.

“I was delighted to be told I’d won. The timing was perfect as my sister Gillian is getting married soon and now I’ll have a new upmarket outfit to wear.”

The Tamworth department store is one of the last of its kind in the area, following the closure of home and fashion stores by the Midlands and Heart of England Co-ops.

“Tamworth still has a traditional market and we are a large independent department store offering fashion, footwear, furniture, gifts, textiles and so much more under one roof.

“Many people really value this as it is a rare combination these days.”

The first floor of the Tamworth Co-op department store is now entirely dedicated to clothes, most of which are at outlet prices giving fantastic savings on normal high street price tags.