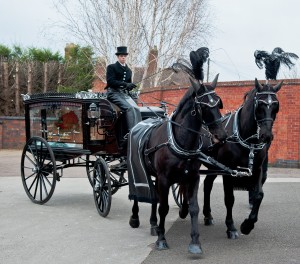 Tamworth Co-operative Society says 2014 was a record year for the number of funerals featuring horses. Amanda Woodward, general manager of the Society’s funeral division, says requests for horses have rocketed during the last two years.

“We have noticed an increase for a while now, but especially during the past 12 months,” she said.

“I think people have seen similar funerals on TV and have decided that they would like the same when their own time comes or when they lose a loved one.

“At one time we were only asked to supply horses maybe two or three times a year. Over the past year around 40 per cent of people arranging funerals with us have at least inquired about horse-drawn carriages. I would estimate the actual take-up would be in the region of 20 per cent. That is a significant increase compared to a few years ago.”

Amanda says soap characters like Pat and Frank Butcher in EastEnders were among high profile celebrities who helped draw attention to having horses at funerals. Iconic Bee Gee Robin Gibb also had a horse-drawn hearse, with footage of the funeral beamed across the globe.

She says it’s easy to see why horses have become so popular.

“I think they really add a sense of importance and occasion to a funeral. More people today want to celebrate a person’s life in a way that people remember. Funerals featuring horse-drawn carriages are by their very nature carried out at a slower pace and this can add a sense of ceremony and dignity to the proceedings. It’s also a green mode of transport.”

“The ones we use are incredibly friendly while at the same time extremely well behaved,” he said.

“They are happy to allow mourners to come and pet them. Just having animals around can be comforting.

“We find the horses really enjoy their ceremonial work and they are very well looked after. Their welfare is paramount.”

Bill says horses can also be decorated in ways which fit in with relevant themes in people’s lives, even including the football teams they supported.

“We had one funeral recently where the horses’ plumes were in claret and blue because the deceased was a big Aston Villa fan.

“I was even requested to wear a Villa scarf, which was fine with me because I’m a big Villa supporter. Mind you in the past I’ve been asked to wear the scarves of other teams including Newcastle United. Despite my own allegiance, I’m happy to do anything like that as a tribute to someone.

“A soap star had a pink coffin carried by a horse-drawn carriage and we have also organised a very similar funeral to that. I’m not sure if that was a direct result of the coverage, but I do think there is an influence from soaps and celebrities.”