Tamworth Co-operative Society has won a prestigious ‘funeral Oscar’ for its pioneering bereavement care service, beating off competition from hundreds of entries. 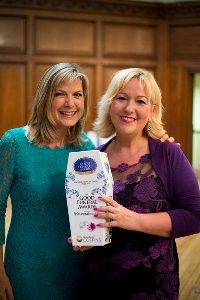 Death at the Good Funeral Awards in London.

Former GMTV host Penny Smith presented the award to Amanda Woodward, general manager of the funeral division, at a glittering ceremony attended by more than 250 people.

The annual awards, held in the plush surroundings of Porchester Hall, recognise excellence in the funeral industry.

The Tamworth funeral firm was commended for

leading the way in working with the local community ‘to understand the myriad of emotions and potential difficulties they may have to endure during a bereavement.’

Judges described the decision to invest in this area of communicating knowledge as a bold one.

Around six years ago, a Bereavement Advice Centre was opened in the centre of Tamworth, inviting people with any kind of question about the subject to come in and ask.

Initially there was scepticism, but now many people avail themselves of the free advice available. The centre is manned by Cheryl Dutton, a trained counsellor, and other dedicated staff.

Tamworth Co-op also uses social media to link up with the community, offering innovative awareness-raising events, supporting local organisations working with bereaved families and hosting many other events that bring the bereaved together, providing comfort and company.

These include a Christmas “carols by candlelight” memorial service held each December in St Editha’s Church in Tamworth and attended by 400 to 500 people.

A spokesman said: “The judges felt that this low key, community based, thoughtful approach to bringing the difficult subject of death and bereavement into general awareness is of huge value, and believe the work being done by Tamworth Co-op deserves to be widely applauded.”

The funeral division was also the first in England to introduce a scheme which enables families to preserve their relatives’ DNA for medical and genealogical research.

And it was the first funeral director to offer HeavenAddress, an online memorial site which allows mourners to write tributes to their loved ones after the service. The Tamworth branch also hosts regular bereavement support meetings in its main funeral home and provides marketing support for another group helping bereaved parents.

Amanda Woodward said: “It’s the biggest prize the Tamworth Co-op funeral division has ever won and recognises the work of the whole team in supporting bereaved families. I’m lucky to have some of the best and most caring people in the business work for me.

“We also came runner-up in the Best Funeral Caterer category. Some of the largest funeral firms in the country entered the competition, including Levertons, the Royal funeral directors. So we’re absolutely delighted to be honoured in this way.”