Tamworth Co-op shoppers’ loyalty rewards have paid for a lifesaving defibrillator to be installed at a working industrial museum which attracts thousands of visitors a year.

Customers at the Co-operative store in Stretton donated their dividends to raise £1,245 for the emergency device to be provided at Claymills Victorian Pumping Station.

Stephen Goodman, a director of the trust which runs the award-winning museum, described the donation as ‘absolutely brilliant,’ saying it could not have come at a better time.

He said: “We felt that it was vital to have a defibrillator on the site in case any of our members or visitors, many of whom are elderly, suffered a cardiac arrest. So, this donation is really welcome, particularly as we’ve lost income through being closed during the coronavirus pandemic. 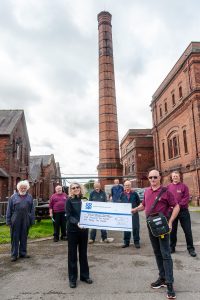 Andrew Parsons (right), chairman of the trust which runs the Claymills Victorian Pumping Station, is pictured formally accepting the bumper cheque from Marina Hutton, manager of the Stretton Co-op convenience store in James Brindley Way. He is holding the defibrillator which shoppers have funded through their dividends. Looking on are other members of the trust who help look after and run the pumping station: Roy Barratt (left), (second row: left to right) Stephen Goodman (membership secretary), Jeff Gamble, Arthur Webb and John Reeve, and Johann Jones (at the back).

“We can’t thank the shoppers enough for their generosity, as well as Tamworth Co-op which owns the convenience store and hands out these dividends. The defibrillator will also be available if anyone in the area immediately outside the pumping station needs it.”

Marina Hutton, manager of the shop in James Brindley Way, said customers would be delighted to know that the dividends they earned on their purchases had funded such a vital piece of equipment.

The former Grade II* pumping station in Meadow Lane, Stretton is one of only three such buildings to survive in England. It opened in 1885 to pump sewage from Burton to farmland about three miles away. The bulk of the effluent came from Burton’s many breweries. In its heyday, its steam-powered engines worked round the clock, throughout the year, pumping 4.5 million gallons a day. It closed in 1971 but was subsequently restored by volunteers.

The museum is currently open to members only to comply with social distancing rules but usually attracts around 5,000 visitors a year from as far away as Japan and Australia.

In 2016, the Duke of Gloucester unveiled a plaque in one of the engine rooms, recognising the work of the dozens of volunteers involved in the ongoing restoration and running of the former Burton Corporation Pumping Station.