Tamworth Co-operative Society has handed out its biggest ever amount from its highly successful Community Dividend Fund. 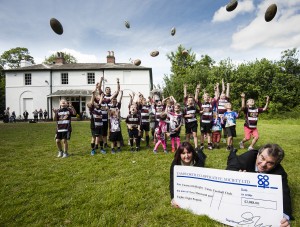 Rod Bristow, vice chairman of Tamworth Rugby Club, and Julie Clarke, manager of Tamworth Co-op’s town centre supermarket, touch down with the huge cheque in front of a group of delighted young players.

A bumper cheque for £2,088 was presented to Tamworth Rugby Club which boasts over 1,000 members ranging from toddlers to pensioners.

Vice chairman Rod Bristow said club members were stunned to receive such a large amount of money. He said it would be enough to re-stock the gym with new equipment to benefit the health of all age groups.

The money was raised by generous shoppers at the Tamworth Co-op’s town centre supermarket donating the dividends they earned on their purchases.

“We’re knocked out by this gift and would like to thank the Tamworth Co-op for operating such a great community scheme and the shoppers who helped our cause,” said Mr Bristow.

“We’ve needed new gym equipment for a while now and it’s one of our current projects. Thanks to this donation things will happen on that front very soon and a lot of people of various ages will benefit.

“We operate many teams, from under 6s all the way to veterans, and we also host a wide range of activities at the club too. We have a long history and are vey much at the heart of the community.”

The roots of rugby in the town can be traced back to the 1880s. Tamworth Rugby Club grew steadily in popularity until the First World War interrupted its progress.

The club was reformed in 1925 by local solicitor John Hunt Dewes. At that time games were played in the Castle Grounds with the Castle Hotel serving as a meeting place for players.

In 1946-47 Queen Elizabeth Grammar School introduced the game and it became the school’s main sport.

When new owners took over, the club began to meet in Market Street and by the 1960s it had three teams and a colts side.

When Wigginton Park was defined, the club obtained a lease for two pitches and it took over its present home at Wigginton Lodge. The first matches there were played in 1970.

Every year each Tamworth Co-op branch is linked to a different cause and a five-figure sum is shared between many community organisations.

Supermarket manager Julie Clarke handed over the cheque, amid great cheers from a group of younger players.

“It’s a lovely historic setting and clubhouse and the club is at the centre of so many people’s lives. It’s a great cause to support and thanks to the generosity of our customers we have been able to hand over a fantastic amount of money to the club.”