Volunteers at a Tamworth swimming club have been buoyed by a £500 donation which will help adults and children with a range of disabilities learning to swim.

Tamworth Unicorns Swimming Club for Disabled Persons has already used the much-needed injection of funding to buy specialist, inflatable jackets for use in lessons. 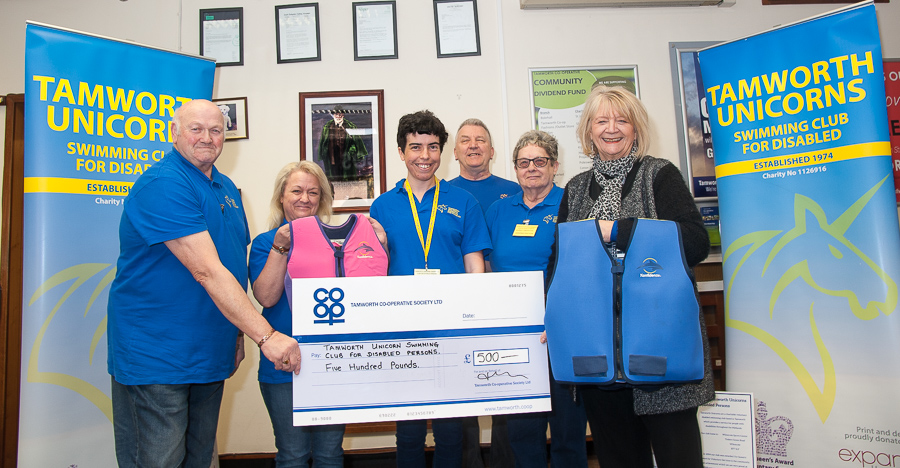 Customers at Tamworth Co-op’s department store forfeited the dividends they earn on their purchases to raise the money for the club which has 78 members aged four to 70.

Julie Plummer, retail co-ordinator of the town centre store, said “I’m delighted that we’ve been able to make such a valuable contribution to this fantastic group and that this money will help keep its members safe.”

Bob Griffiths, chairman of Tamworth Unicorns, which was founded in 1974, said: “We can’t thank the Co-op and its shoppers enough for their generosity. The inflatable jackets we had were coming to the end of their life, so this grant came at just the right time for us. We never expected to be given this amount of money.”

The club, which is one of the few such organisations in the country, received the prestigious Queen’s Award for Voluntary Services to the Community in 2004. Members include people with physical disabilities, as well as stroke patients, referred to the group by their GPs, and others with conditions such as autism. One man, who was wheelchair-bound after being paralysed down one side through a stroke, is now able to walk with assistance across the width of a swimming pool.

Others, like Charlotte Mawdsley, who has diabetes, epilepsy and joint problems and has been coming to the club since she was eight, have gone on to become senior swimmers, assisting adults and children in the water.

The club, which holds fortnightly sessions at Wilnecote Sports Centre, also organises regular galas and held the title of Staffordshire champions for 13 years in a row.

The Community Dividend Fund, now in its tenth year, distributes thousands of pounds annually to local charities, clubs and schools in Tamworth Co-op’s trading area. Each of its eleven convenience stores, as well as the department store and supermarket in Church Street, adopt a deserving cause.