A Tamworth funeral home supervisor is to leap out of a plane to raise cash for the Alzheimer’s Society in memory of her ‘special nan.’

Heidi Price, deputy office supervisor at Tamworth Co-op Funeral Service in Upper Gungate, has set her fundraising target ‘sky’ high with more than £1,000 already pledged in sponsorship. Her skydive is due to take place in Nottinghamshire on August 6, 2022.

Heidi (41) says she was extremely close to her nan June Dolan who lived in Fazeley and had suffered from Alzheimer’s for more than 20 years. 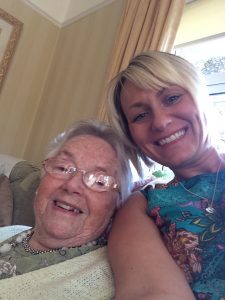 Heidi Price pictured with her nan June Dolan in 2016.

“She was 85 when she passed away in 2019, but we believe she first suffered from dementia in her early sixties,” said Heidi. “We looked after her at home for most of that time, but in the end she had to go to a care home.”

“Her mother, my great nan Doris, also had this terrible disease. At that time there wasn’t the knowledge and understanding that there is today.

“As a family we have experienced the devastating effects of Alzheimer’s for more than two decades. At times it was very difficult, not just for my nan but the whole family too. The more support the Alzheimer’s Society receives for research, the more sufferers and family members will be helped in future. That’s why I’m doing this.”

Heidi, who lives in Wilnecote, says that although she is feeling excited about the skydive, she knows she will be very nervous on the day.

“I’m not really a daredevil at all. I used to be OK doing the big rides at leisure parks but not so much now. Nowadays I think more about how safe they are. To be honest I’m not even that comfortable flying in a jet, but you just have to get on with it.

“My boss Glen keeps joking that it will end up being more of a ‘push’ than a jump! I’m hoping that I can relax enough to just take in the view on the way down, because it’s not something that happens every day.”

The mother-of-two has been ‘bowled over’ by the support she has received from her employers, colleagues and friends.

“The Tamworth Co-op has donated £100, and everyone else has been amazing too. I can’t thank them all enough.”

Anyone wishing to help Heidi raise more money to fight Alzheimer’s can do so via her JustGiving page https://www.justgiving.com/fundraising/heidiprice-mynanjuney