Tamworth shoppers joined in the ‘World’s Biggest Coffee Morning’ in aid of Macmillan despite torrential rain.

Among those who nipped into the coffee morning at the town’s Bereavement Advice Centre was 87-year-old Sheila Sharman from Stonydelph. 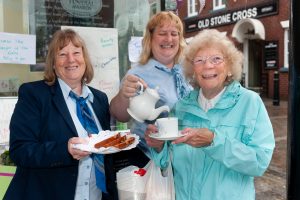 After drying off with a cuppa she had a few attempts at the tombola to help raise money for the cancer charity.

“Macmillan are always there when you need them most which is why I thought it was important to drop in, even though it was pouring down with rain,” said Sheila.

Staff at the Tamworth Co-op run centre brought out their best china to hand out coffees, teas and an array of delicious cakes for visitors to sample in return for a donation.

Jane Ellis and Margaret Smith, from Belgrave, had a personal reason for attending the coffee morning. Their friend and neighbour died three years ago from bowel cancer at the age of just 41. 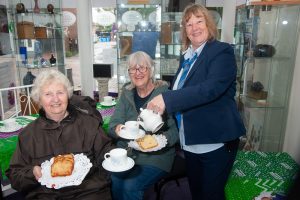 Jane said: “I took her for chemotherapy and stayed with her the night before she died. She was helped by the Macmillan nurses who came out to her at home. I saw the wonderful job they do supporting people through difficult times.”

Businesses in the town contributed a host of raffle prizes to boost the fundraising. Prizes included a £100 hamper full of tasty treats from Tamworth Co-op, a set of wireless ear buds donated by Valli Forecourts BP garage, vouchers and beauty products from Lush Beauty, Em’s Beauty House and Saskia Price, a plant from Julie-Ann florists and a voucher from Flowerzone. There was also a ‘guess the weight of the cake’ competition.

“Despite the heavy downpours, shoppers kept dropping in, as well as people we have given bereavement advice to in the past. We really appreciated their support. It was also heartening to see the business community rallying round to donate prizes. We would like to thank them all. 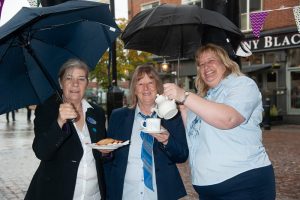 Pictured at the coffee morning with their umbrellas out to fend off the bad weather are (left to right) Tamworth Co-op staff Cath Scott, Anne Livingstone and Cheryl Dutton.

“Since we started these coffee mornings several years ago, we have raised thousands of pounds for Macmillan. A lot of the families we deal with have been touched by cancer. They often ask for donations to be made to Macmillan in lieu of flowers because they want to support a charity that provides specific help.”

A total of £182.31 was raised during the event. The money will go towards providing specialist nurses and emotional help for people affected by cancer.

Dozens of similar coffee mornings took place up and down the country during September 2019. The first fundraiser took place in 1990 and has since generated more than £200 million.