It’s not every day you get to write on a coffin, but many Tamworth shoppers took the opportunity to do just that as part of a national event aimed at encouraging people to talk openly about death.

Visitors to a pop-up shop were invited to ‘decorate’ a white coffin with a list of things they would like to do before they die during Dying Matters Awareness Week.

One woman wrote that she wanted to have dinner with Sir Cliff Richard. Another person’s ambition was to run the London Marathon before their 50th birthday. Someone else wanted to revisit Norway and ‘enjoy every day no matter what the weather.’ There was even a joke scrawled on the lid – Question: Why do cemeteries have walls? Answer: Because people are dying to get in. 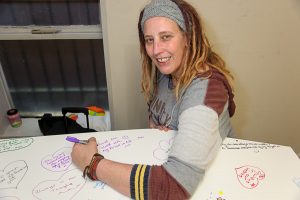 Sam Hudson from Tamworth writes her bucket wish on top of the coffin – she wants to travel the world with her partner Toni.

Others penned messages to lost loved ones, including a girl whose father had died recently, or drew pictures. One simply said: ‘I’m free’ next to a picture of birds flying among clouds.

The three-day event last week (May 9, 12 and 13) was hosted by Tamworth Co-op at its premises at 12B George Street, in partnership with St Giles Hospice at Whittington.

Other highlights included complementary therapy sessions provided by St Giles volunteers and a display of funeral songs people would like played at their send-off. Top of the poll, compiled by the hospice, was My Way, with Queen the most popular artist and Don’t Stop Me Now a favourite.

There were also talks on different aspects of death, from understanding bereavement and dispelling crematorium myths to sessions geared towards getting people to make a will and plan their funeral. 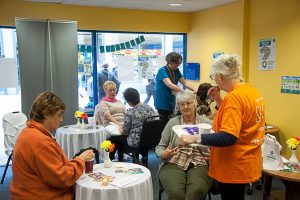 The Dying Matters Awareness event proved popular throughout the week.

Glen Speak, deputy manager of Tamworth Co-op’s funeral division, said that whilst it might be regarded as irreverent to have people writing on a coffin, there was a serious purpose behind it.

“We wanted to introduce a light note to the occasion to help start a conversation about death and it certainly helped to get people talking. Too often it is a subject we avoid because it is difficult, but it is so important to make plans for your end of life so that your family knows what you want when the time comes. It eases the burden on them when making arrangements for a funeral.”

Jenny Burdett was one of the shoppers who called in with her granddaughter Kayley Lockley to see what was happening. She said: “This is an good idea because it is something nobody wants to think about, but really we all should. It’s made me think about my will and organising my funeral.” 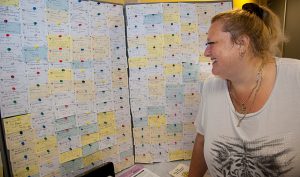 Zena Holmes from Amington looks at what songs people want to be played at their funeral.

Another visitor Zena Holmes, from Amington, said: “An event like this is a good thing. A funeral should be a celebration of a life and so we should be thinking about it. I want my ashes cremated and put into the sea so that they go all over the world.”

It was a particularly poignant time for one of the key organisers, Ian Leech, community engagement manager at St Giles Hospice, as one of the days coincided with the anniversary of the death of his 20-year-old daughter Melissa from cancer.

“That was the reason I went into this type of work. It’s a very important subject. We even had one man come in who hadn’t spoken about his wife’s death four years ago. He was able to talk openly to one of the CRUSE counsellors. If we want to be compassionate communities, to be able to support someone through bereavement, we have to be able to talk about death comfortably.”

Among the experts attending was Tamworth’s funeral champion, Reverend Vic Van Den Bergh, who praised the event, saying it made death accessible without making it morbid.