First Responders have been given a vital injection of cash in one of the biggest handouts to date from the Tamworth Co-operative Society’s Community Dividend Fund.

Thousands of shoppers at the Society’s supermarket donated their dividends to raise £1,819 for the Tamworth Area Medical Emergency Community First Responders (TAME).

The money will help cover the running costs of the group’s response vehicle, and pay for new uniforms for the volunteers who help save lives by working in tandem with the ambulance service. 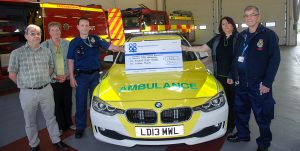 Melvin Watson, the group’s treasurer, said: “We rely entirely on voluntary contributions, so we’d like to say a big thankyou to the people who shop at the supermarket as well as the Tamworth Co-op for organising this initiative. It provides invaluable support to community groups such as ours that depend on the public and businesses for their survival.”

Formed in 2009, the team of 10 First Responders attend around 1,500 incidents a year in Tamworth and the surrounding area, providing initial diagnosis and treatment before paramedics arrive on the scene.

Recently, the responders resuscitated a patient who had suffered a cardiac arrest, as well as a young boy after he stopped breathing.

Julie Clark, manager of the supermarket, who handed over a cheque for the amount raised at Tamworth Community Fire Station in Marlborough Way, said:

“We had an excellent response from shoppers and we’d like to thank all our customers for their support. There’s nothing better than being able to help people in a life and death situation, and the First Responders do a wonderful job.”

Now in its eighth year, the Community Dividend Fund distributes thousands of pounds annually to charities and other good causes in the Tamworth Co-op trading area. Customers at each of the Society’s outlets are invited to cash in their ‘divis’.